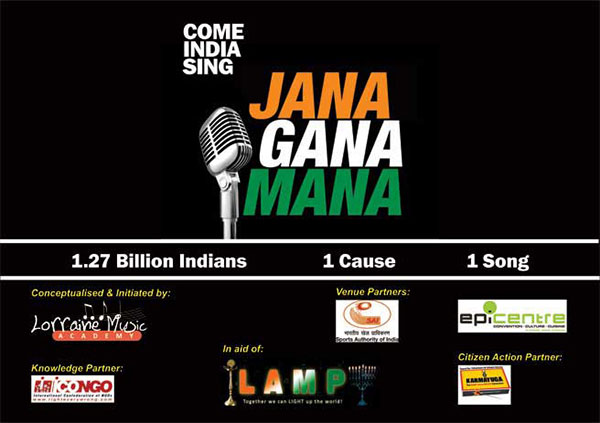 In a splendid show of patriotism, hundreds of citizens gathered and sang the National Anthem. Those present at the occasion were left spellbound by the performances of the school children, trained artists from Lorraine Music Academy and A. R. Rehman School of Music. The launch ceremony included performances of patriotic and folk songs and dances depicting India’s cultural ethos of “Unity in Diversity”.

Shri Oscar Fernandes, Hon’ble Minister of Road Transport & Highways, said “We are participating in a project of high standing. This is a project that will be enjoyed by all citizens of India. This project will gather the citizens of this nation to sing in one rhythm, one melody, one beat, one voice, in unity and without any differences nor controversies. All citizens of this country will sing in one voice “Jana Gana Mana”. This project is of a high calling. Through this National Patriotic Project we will have the whole nation singing our National Anthem in unison, precision and passion. No matter what problem our country will face in the future, we will sing this song in unison and harmony. We have to make every effort to build this national spirit. The spirit of the project is similar to that of the Dandi March initiated by Mahatma Gandhi who gathered the nation with him. We need to bring back that spirit in order to take our nation forward. We shall achieve that through this National Patriotic Project ‘Come India Sing Jana Gana Mana’.”

Aubrey Aloysius, founder of the Lorraine Music Academy and the LAMP Trust, and Chairman of the National Patriotic Project, said “Music is food for the soul. Good food and good exercise gives you good physical stability. A good diet of the right kind of music gives you mental, emotional, intellectual and spiritual stability. Music helps the creative process and sparks the imagination and ideas. When this musical imagination and experience of singing our National Anthem is ignited in a group circumstance, we have the most extraordinary power to change young lives for positive living and nation-building.”

The Guests of honour at the event also included:

The “Come India Sing” project is a clarion call to 1.27 Billion Indians to stand together for one cause – the Unity of India, by singing one song – our National Anthem.

This also marked the launch of the “Come India Sing” Nation-wide Talent Contest which is open to all. This includes a slogan contest for every Indian citizen to express what the National Anthem means to them. The contest will also include the singing of “Jana Gana Mana”, and a Patriotic Song. Participants can log on to www.localhost/lma

Select participants and winners of the above project will get opportunities to perform on stage before audiences in the National Capital Region of Delhi and across the country. Winners of the “Come India Sing” Nation-wide Talent Contest will earn the privilege of being invited to sing the National Anthem alongside the nation’s leaders and to receive their award. Individuals and groups whose performance stand out will also be invited to attend or to perform at an enormous cultural program depicting India’s cultural ethos of “Unity in Diversity”, in a large venue in the National Capital Region of Delhi. Thousands of the nation’s youth will together in one voice celebrate our great nation by singing "Jana Gana Mana". This event will be broadcast nationally and internationally, giving participants exposure on a grand scale that will, at the very least, leave them with memories that will last for a lifetime and, at the very most, be the key element in inspiring them realize their greater dreams.

To participate, one can log on to the following websites:

The project is conceptualised and initiated by Lorraine Music Academy in aid of LAMP Trust. The project is being implemented in collaboration with our partners Sports Authority of India (Venue Partner), iCONGO (Knowledge Partner), KarmaYuga (Citizen Action Partner).