This Christmas Eve Season LAMP Invites You To Sing Carols, Dance & Laugh To GIVE Generously!

This Christmas Eve Season LAMP Invites You To Sing Carols, Dance & Laugh To GIVE Generously!

As the Christmas and New Year Season approaches, LORRAINE MUSIC ACADEMY and LAMP TRUST have great plans to bring light to the city of Gurgaon and the National Capital Region through music and drama. There will be Carolling, Dancing and a Comedy Musical Play.

Entry is free to the Concerts and the Drama. For more information, please email lorrainemusicacademy@gmail.com OR lamp.trust.india@gmail.com OR SMS 9910143344 / 9910229546. LAMP urges the community in New Delhi and the National Capital Region to donate generously to LAMP. This will help LAMP to bring cheer to poor children this season.  To DONATE any GENEROUS SUM towards the above cause this season, one may make out a cheque in favour of “LAMP”. Donations will be eligible for INCOME TAX EXEMPTION under SECTION 80-G of the Income Tax Act. The musicals form a part of the Music & Art Festival in aid of LAMP Trust. LAMP endeavours to make resources available towards skill & talent development for the poor & under-served communities. LAMP is a trust registered under the Indian Trust Act, 1882 in Gurgaon, Haryana, India (Regn. No. 19238, 2010-11) with a mandate to promote Music and the Arts – Performing Arts, Visual Arts & Literary Arts. LAMP aims to raise resources to set up the LAMP World Cultural Centre in Gurgaon, National Capital Region of Delhi, India to promote Music and the Arts.

LORRAINE FIONA ALOYSIUS is a Licentiate of the Trinity College of London – UK (Pianoforte) and a Masters in Banking & Finance. Lorraine has been recently awarded the coveted “KARMAVEER PURASKAAR” for her contribution and work in the field of Music, Art & Culture. Lorraine has been living in Gurgaon since 2004 and is the Creative Director of Lorraine Music Academy and the Trustee of LAMP Trust.

SWAPNA ABRAHAM is a Singer-Songwriter, born in Kochi and living currently in UAE. She is the only solo artiste in India in English Music production, be it Gospel or other category, to bring out 19 albums. Swapna is being awarded the LAMP–iCONGO Karmaveer Chakra for Music (Maestro) Award for her successful career.

Cast of the Musical Comedy Drama “Let’s Freeze The Mother-In-Law”:

DR. GERALD RODRICKS’ life time achievements can be summed up with the 3 S’s : Studies, Sports, Stage Craft. Dr. Rodricks is being conferred with the LAMP-iCONGO Karmaveer Chakra for Music & Drama (Thespian) 2012 Award for his amazing work in the field of Education, Music & Drama.

AUBREY ALOYSIUS is an ex-International Banker, Marketing Professional, Entrepreneur, Thinker and Doer. He has been recently awarded the coveted “KARMAVEER PURASKAAR” for his visionary contribution and work in the field of Music, Art & Culture and has been living in Gurgaon since 2004 and is the Founder Chairman, Managing Director & CEO of Lorraine Music Academy and the Founder Trustee & President of LAMP Trust.

KAMALINI ROY HIREMATH has been performing on stage from the young age of 3years as a vocalist and an actor. She has done numerous plays both in English as well as in vernacular languages.

SANDEEP KOHLI is an accomplished Human Resource Professional with more than 20 years experience. He, with support from his wife Savita, very recently launched ‘Lets Do Our Bit’ Foundation to support children who are battling with life threatening illnesses..

NINOTCHKA COLACO, a former aviation professional, is from Goa. Ninotchka has been here since 2011, currently assisting Lorraine Fiona Aloysius at Lorraine Music Academy. 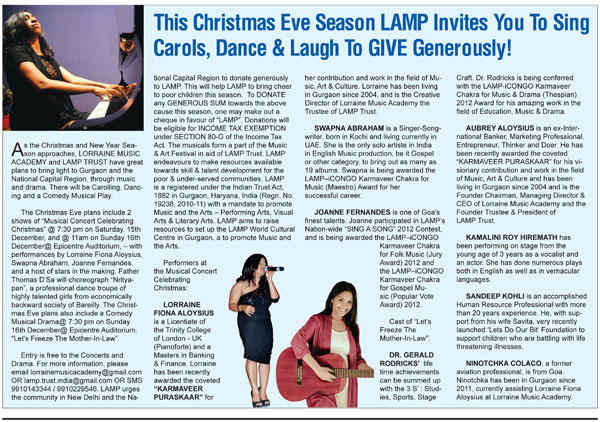 ONLY FOR A FEW GOOD LAUGHS
Scroll to top