ONLY FOR A FEW GOOD LAUGHS

ONLY FOR A FEW GOOD LAUGHS

A musical comedy that talks about the saas-damad relationship

Move over saas-bahu sagas, it is time for saas-damad drama. Watch out for this rib-tickling musical comedy about a guy being rejected by his mother-in-law, which will be staged in the city today. Titled “Let’s Freeze The Mother-In-Law”, the play revolves around a young girl Emily Hendrix whose lover Hari Singh is initially rejected by her mother. “The mother-in-law is often the dreaded monster of the family especially in India where one still has the culture of joint families. But usually the focus is on the girl’s mother-in-law. This play is a hilarious take on the relationship between the groom to be and his mother-in-law. It is the male version of the saas-bahu soap operas,” says Aubrey Aloysius, founder-trustee, LAMP Trust, a social organization promoting performing arts in the city. “Music forms an important part of the play,” says Gerald Rodricks, the director of the play.

Make merry
The play brings together working professionals from different fields of music, education and management who meet regularly in the evening after work hours and early mornings to practice for the play. “It does require a lot of dedication. It is just a matter of figuring out the geographical details,” says Sandeep Kohli an HR professional who plays Hari Singh, the lover in the play. “Christmas is all about getting together and celebrating the festival as one family. Practising together at Aubrey’s home has brought the cast together with lots of fun-filled memories,” says Rodricks, the director. 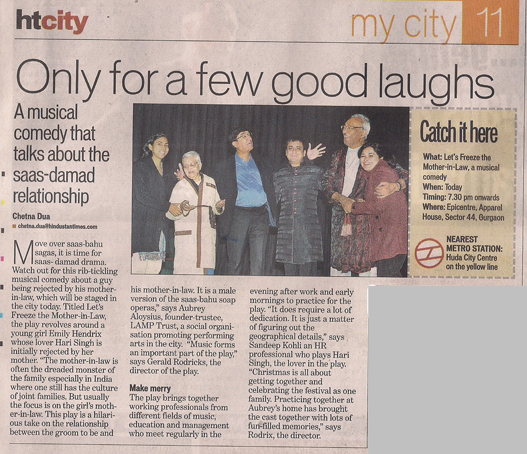 Stills from the hilarious Musical Comedy Drama “LET’S FREEZE THE...
Scroll to top