One of the important tasks of a thoughtful civil society is to create and sustain as many areas as possible of informed discussion and debate. In India, that space has remained surprisingly small. An inclination towards passivity, a wide latitude for compromise (even if it involves the abandonment of important values), a fragile and misguided sense of nationalism, a desire to get on with one’s own existence at the expense of wider societal implications – are some of the usually touted culprits. In addition, we harbour a misplaced notion of critique, viewing it in the light of a criticism rather than an essential prerequisite for growth in the fullest sense, as individuals, as society and as a nation.

LAMP Trust is taking the initiative to facilitate such a space for dialogue and is organising “The Thinkers’ Forum” to be held in Gurgaon @ 6:30pm on Sunday 9th December, 2012. This Forum will facilitate an exploration on the issue of leadership. In the Indian context, the “quality of leadership" issue has long been an abiding staple of political and social discourse. In keeping with these concerns, this year’s theme is “The Application of Principles in an Age of Opportunism: Principle Centred Leadership”.

The Forum is open to thinking leaders – professionals and entrepreneurs, who are concerned not only about the ethical foundations of their own professional and businesses practices but also of society at large. It will present an opportunity to think and dialogue with others, where a carefully selected package of readings supports the dialogue and where excellent moderation engages every participant. The session would span 2 hours.

Dr. Vishal Mangalwadi will moderate the session which will include readings from his latest book “Why Are We Backward” and discussions. Vishal Mangalwadi, is an international lecturer, social reformer, political columnist, and author of seventeen books. Born in 1949 and raised in India, he studied philosophy at L’Abri Fellowship in Switzerland. In 1976 he returned to India where he and his wife, Ruth, founded a community to serve the rural poor. His first book, The World of Gurus, was published in 1977 by India’s Vikas Publishing House, and serialized in India’s then-largest weekly, Sunday. It was Mangalwadi’s books, In Search of Self and India: The Grand Experiment, that first brought his works to the attention of the American public. A recipient of Dr Bhimrao Ambedkar Distinguished National Service Award, Vishal Mangalwadi, LLD, started as a social activist working among the rural poor in Madhya Pradesh. His daring and innovative work catapulted him into the national headquarters of the Janata Party, where he worked for the empowerment and liberation of peasants and the lower castes. He also in the headquarters of the Bahujan Samaj Party. Presently, he is innovating an education revolution that will use the Internet to take the world’s best college education into every village. Vishal and his wife, Ruth, have two daughters and five grandchildren.

There are a couple of seats available for the session on Sunday 07 October. Those interested to participate, call Aubrey Aloysius – 99101-43344 for the invite. 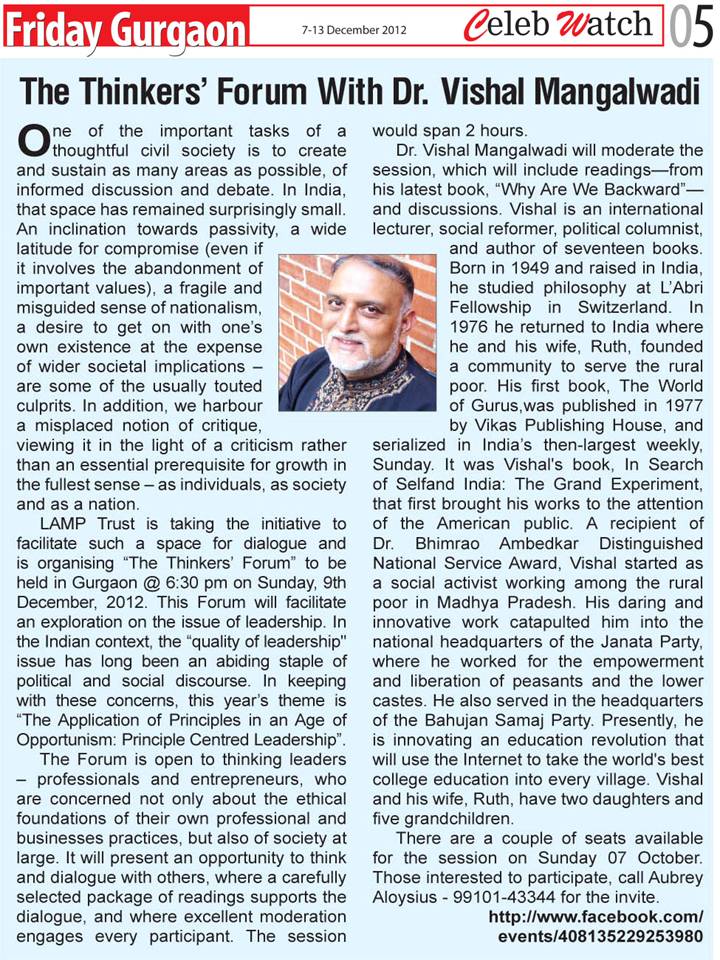