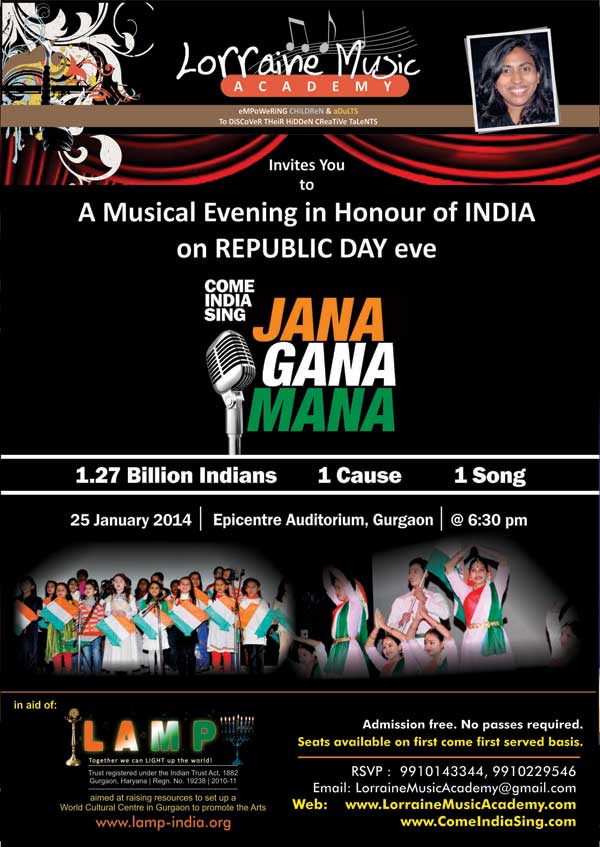 We begin this year with a bang – on Saturday the 25th of January 2014 – to celebrate our Country’s REPUBLIC DAY!

The students of Lorraine Music Academy and schools across the National Capital Region will express themselves through music by playing instruments and singing songs that make them happy. We will also have folk songs from across North, South, East & West India, patriotic songs, dance performances, poetry recitals and speeches. The musical evening will include performances by children and youth – members of our next generation, and citizens of India. It will include performances by members of the community.

From this Republic Day eve, we are launching a drive to encourage singing of our National Anthem the right way as per the code laid out in the Constitution of India. We will speak at gatherings of students in schools and educational institutions, during assembly time, in offices and institutions, conduct workshops and training sessions, teaching the correct way of singing the Anthem, with passion, pride and precision, ie- in 52 seconds. We will encourage singing across the National Capital Region and the nation among citizens, community members, members of RWAs, students, youth, offices colleages, etc.

So spread the word, and join in singing our National Anthem. Other songs – patriotic songs, festive songs, folk songs, pop songs – can follow as well.