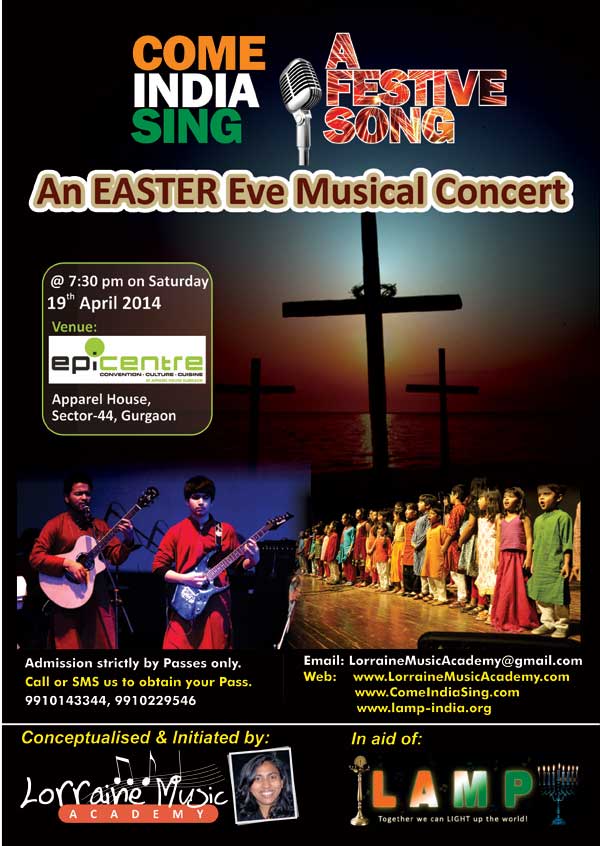 This Easter eve, the Lorraine Music Academy staged a Musical titled “An Easter Tale”. The performance happened at Epicentre Auditorium, Gurgaon on 19th April. This musical evening is in aid of the LAMP Trust and the National Patriotic Project “COME INDIA SING….”. The Guests of Honour were Mr. John Samuel (I.A.S.), Chief Post Master General, Government of India and Mr. Manoj George, Advocate, Supreme Court. Mr. Debasish Mitra and Mr. H. R. Bangia too joined in the lighting of the traditional lamp.

The story and significance of Good Friday and Easter were told through an interesting dialogue between mother “Becca” and her daughter “Karen” in the modern day India. Actual scenes from Jesus’ life were enacted out and sung. These included scenes of Jesus healing the blind man, forgiving the adulterous woman, healing people, washing his disciples’ feet. The highlight was the scene of the ‘Last Supper’ with all 12 disciples sitting at a table and eating with Jesus.

Many famous Easter favourites, including both old and new, were beautifully rendered – “The Old Rugged Cross”, “Mary Did You Know”, “The Stone Is Rolled Away”, “He Lives”. The grand finale was the Rock gospel song “My Redeemer Lives” sung by the LAMPstand Rock Band and 20 young children. This musical was directed by young automobile engineer Tina Samuel, with simple but creative and impactful props and period costumes.

The audience was left absolutely spell bound by the musical and visual and spiritual treat.

The musical also witnessed the launch of “Come India Sing A Gospel Song”, a new category of the nation-wide talent contest and audition “Come India Sing” with the singing of the famous gospel song “Amazing Grace” by Aditi Iyer and Mozart’s “Hallelujah” by Serene Yoneko. This category will encourage aspiring Indians who wish to showcase their talent and aspire to be launched on a global platform. Some of the world’s greatest pop artists and Grammy Award winners like Michael Jackson, Whitney Houston, and many others either won their first Grammy Award or launched their singing careers by singing a gospel song.

Music is food for the soul. Good food and good exercise gives you good physical stability. A good diet of the right kind of music gives you mental, emotional, intellectual and spiritual stability. Music helps the creative process and sparks the imagination and ideas. When this musical imagination and experience of singing in a group circumstance is ignited, we have the most extraordinary power to change young lives for positive living and nation-building. Easter is a festival that is celebrated globally. India, with its beautiful and diverse cultural heritage, is known globally as the ‘land of festivals’. We have a great and diverse heritage of Folk and Festive Songs. India’s unique cultural ethos is well described as ‘unity in diversity’. Going forward, we will encourage every Indian to sing their respective Folk Songs and Festive Songs. We will encourage singing across the National Capital Region and the nation among citizens, community members, members of RWAs, offices colleagues, students at schools and colleges, etc.

This event forms a part of the ongoing Nation Building Project “Come India Sing Jana Gana Mana” that was launched on 15th August 2013, our Independence Day.

The “Come India Sing” Nation-wide Audition and Talent Contest is open to all. This includes a slogan contest for every Indian citizen to express what the National Anthem means to them. The contest also encourages the practising and the singing of “Jana Gana Mana” and other songs.

So spread the word, and join in singing our National Anthem along with other songs – Patriotic Songs, Festive Songs, Folk Songs, Pop Songs, Gospel Songs, Christmas Carols – which will follow as well.