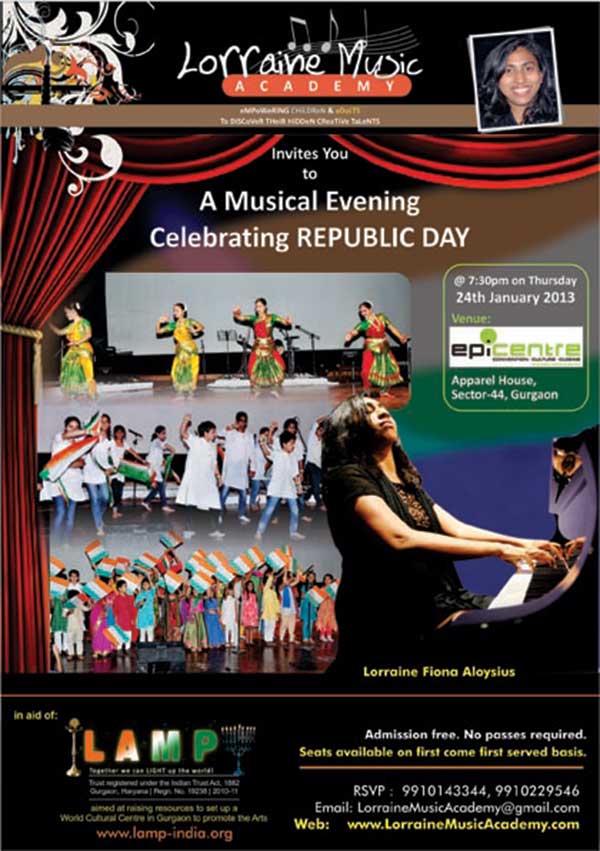 It was a “Musical Evening in Honour of India”! It was sheer joy to see over 120 students and adult participants perform on stage at the event. In keeping with LAMP’s objective of nurturing talent and providing a platform for the exhibition of talent, the next generation of global Indians aged 4 to 25 years – students from various schools across the National Capital Region & adults – performed along with professional musicians who had performed across India and the globe.

Students of Lorraine Music Academy sang patriotic songs; Rishaan Bhatnagar sang “Imagine” by John Lenon; Nayantara Sen sang a Bengali patriotic song “Dhitang Dhitang Bhole”; Adya Uppal sang “Ao Bachcho”. The Lorraine Music Academy Band that included Gabriella Extross, Atreya Mitra on vocals; Kaustav Sood on the Drums; Mike Manlun on the Bass; Mrinav Saxena on Rhythm Guitar; Andrew Packiam on the Lead Guitar; Dhruv Malhotra and Adi Chaturvedi on Keyboards performed “Cry For Freedom” by White Lions and “Shape of My Heart” by Sting. Students of the Scottish High International School sang a wonderful song “Hymn to the Nations” set to the music of “Ode to Joy” composed by Ludwig Van Beethoven. Students of the Excelsior American School performed a wonderful medley of dances with patriotic flavour. “Nrityapan” performed 3 sets of dances – “I Love My India”, “Gypsy Dance” and “Pray for India” which was dedicated to every Girl Child and Woman in the Nation on the occasion of the "National Day Of The Girl Child".

Twelve year old Ranveer Singh Saini, a student of Lorraine Music Academy and the Scottish High International School, gave a wonderful rendition of “Ae Watan Ae Watan Hamko Teri Qasam” for which he was awarded the “LAMP-iCONGO Karmaveer Chakra for Patritoic Music (Popular Vote) 2012”. Diagnosed with Autism, a Pervasive Development Disorder (PDD) at an early age of 2yrs, this child has shown and proved to the world that a special needs child can at times outdo and overpower the capabilities of any child of his age.

The evening also witnessed the announcement and launch of the 2013 edition of our Nation-wide Talent Contest for the coveted “LAMP – iCONGO Karmaveer Chakra For Music & Art 2013” awards. This initiative will reach children and adults across India. After a screening, evaluation and selection process set by MERCER and GRANT THORTON, the finalists / selected participants would be invited to The National Capital Region of Delhi for the annual performance and award event.

There would be various categories / themes for this award which would be announced annually including Patriotic Music. This would be open for performance in all National, Regional / Local languages and in English. This category would enable participation from across the nation cutting through the urban-rural, linguistic, cultural and socio-economic divides. It is also open to the Indian Diaspora and people of Indian origin spread across the globe.

The winners of the 2013 edition of LAMP’s Nation-wide Talent Contest will be awarded the “LAMP-iCONGO Karmaveer Chakra for Patriotic Music” at the annual performance and award event to be held around Republic Day of 2014.

The Awards will include the following categories. Details will be announced shortly and would be visible on www dot LorraineMusicAcademy dot com

The above concert forms a part of the Music & Art Festival in aid of LAMP Trust – aimed at raising awareness and resources to set up the LAMP World Cultural Centre in Gurgaon, National Capital Region of Delhi, to promote the Arts – Performing Art, Visual Art, Literary Art. LAMP also endeavours to make resources available to the poor towards skill & talent development, training & basic education in the under-served communities across India.

Lorraine Fiona Aloysius started playing the piano from the age of 8, greatly encouraged & inspired by her mother Helen D’Cruz. Lorraine is a Licentiate of the Trinity College of London – UK (Pianoforte) and a Masters in Banking & Finance. She has experience in teaching, creative thinking, public relations, training and motivating large teams across the country. She has sent over 300 students for examinations of Associated Board of the Royal Schools of Music, U.K., Trinity College of London, U.K., Trinity Guildhall, U.K., and RockSchool, U.K. Lorraine also oversees a regular visiting faculty that comes in from across the globe including some of the top global Colleges of Music & Drama, to teach our students during various periods of the year. Lorraine Fiona Aloysius has been recently awarded the coveted “KARMAVEER PURASKAAR” for her contribution and work in the field of Music, Art & Culture. Lorraine has been living in Gurgaon since 2004 and is the Creative Director of Lorraine Music Academy and the Trustee of LAMP Trust.

Aubrey Aloysius is an ex-International Banker, Marketing Professional, Entrepreneur, Thinker and Doer. He is a dynamic visionary with a focus on planning and execution. He has worked with clients across domains and geographical regions, ranging from established multinational corporations across India to start-up business ventures. Aubrey Aloysius actively supports the rich heritage of World Music & Arts – Performing Arts, Visual Arts, Literary Arts. Aubrey Aloysius has been recently awarded the coveted “KARMAVEER PURASKAAR” for his visionary contribution and work in the field of Music, Art & Culture. He has been living in Gurgaon since 2004 and is the Founder Chairman, Managing Director & CEO of Lorraine Music Academy and the Founder Trustee & President of LAMP Trust.