Two musicians, Aubrey and Lorraine Aloysius, have a sole aim – to reach out to 1.27 billion Indians and make them sing the National Anthem “correctly”.

The duo pointed out many mistakes – ‘utkala’ instead of ’uchchala’, the habit of waiting for two beats before singing “jaya jaya jaya, jaya he”, and the most common mistake of taking more than 52 seconds to sing it.

“The world recognises and praises our National Anthem. However, Indians have a tough time getting it right and they have been confused by the various versions of the anthem. The anthem is supposed to be sung in 52 seconds. But there are some versions which take over two minutes. The children are unable to understand which is the right tune and, hence, cannot sing it properly,” Aubrey Aloysius said.

Lorraine, who runs the Lorraine Music Academy in Gurgaon, said “We have also started a nationwide online contest. Children can prepare their song and upload it on YouTube and post the link on our website, Lorraine Music Academy. We will then select the ones who come closest to singing the anthem correctly.”

Principal of G D Goenka School Neeta Bali said this was a new initiative and would go a long way in promoting Indian culture among students.

Most parents and children said they learnt something new on Wednesday. Aditi Singh, a parent, said, “We should learn from our sportspersons, they sing the anthem with pride and passion.” 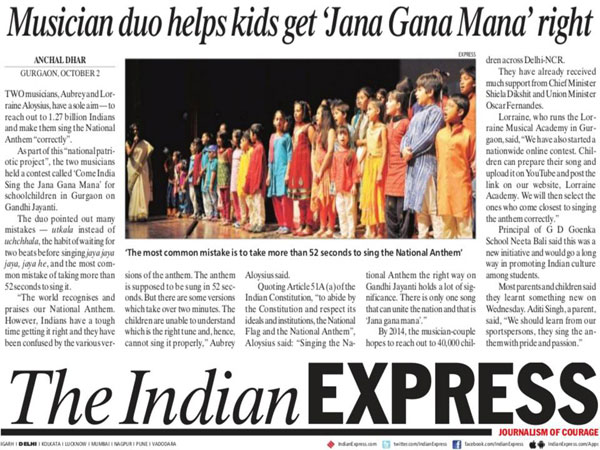