Fasten your seat belts… your aircraft pilot might just be drunk

If you are seated in an aircraft and find your co-passenger all jittery, then it’s probably not due to turbulence in the air. It could be because your neighbour has read reports of how from January 2009 to November 2010, 57 pilots were found drunk during preflight tests in India out of which only 11 lost their jobs! Your neighbour has every reason to be nervous coz one of those pilots could be flying you around… Yes, that’s true and now that you have fastened your seat belt, you can read what other frequent fliers have to say: “It’s like going on a suicide flight! I guess, now we have to extend the Don’t Drink and Drive slogan to Don’t Drink and Fly!” exclaimed hip hop artist, Saurabh Som.

Quite alarmed by the scary news, student Aloka Desa freaked out. “Think of the passengers’ safety. If you’re flying with an Indian airline, you ought to be apprehensive. The whole journey would be nerve wrecking,” she said. There are some who feel it’s safer to travel by road than air now. “At least if you’re travelling by road, you can do something to save yourself. But, there’s no chance of surviving in the sky, if, God forbid, there’s going to be a crash, thanks to a drunk pilot!” said DJ Donabelle Zuzarte, sarcastically.

But there are some brave-hearts left, like Fabian de Souza, Governor of football academy Goa United. “When I fly I’m never scared. An accident or death is inevitable. It can happen if you’re flying with a sober pilot as well,” he said. But that doesn’t mean he is ready to forgive those who risk the lives of so many passengers. “The authorities have to take action against them. There is a huge risk involved, here,” he said.

Others like Aubrey Aloysius, MD of a music academy, has many questions to ask the authorities and to the pilot, that is, if he’s… err…  sober. “If, in a span of 24 months, 57 pilots were found reporting for duty, drunk, why was it that only 11 lost their jobs, while the rest got away with it? What if, according to the number of pilots found drunk, we had two crashes a month? Where would this leave India as a global tourist destination? How many flights does a pilot fly per month?” Aubrey might have to wait for his questions to be answered but for now, take our advice: Next time you board a flight , instead of just admiring that air hostess, listen or if possible, take down the instructions she’s giving you on how to save yourself if, God forbid, there’s a crash! Bon Voyage! 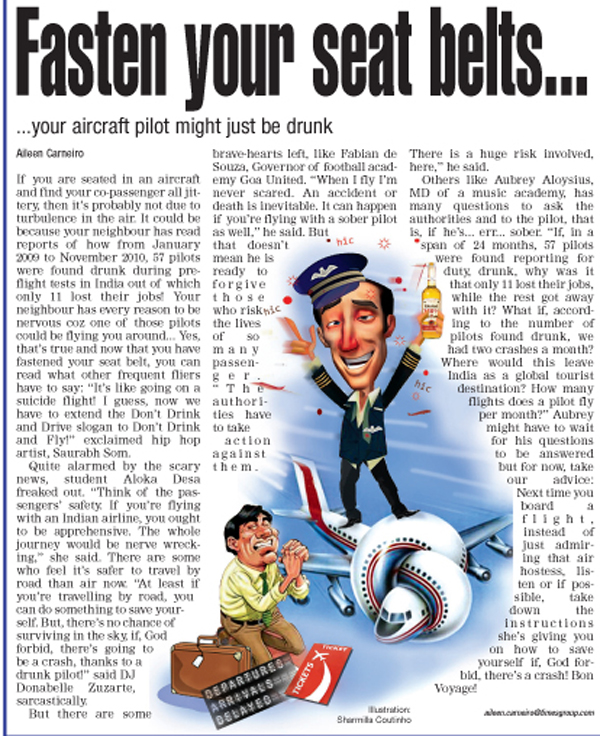