Lisa Monteiro is entranced by the musical aura surrounding Israeli musician Tal Kravitz. Brought down to Goa by the Lorraine Music Academy, Kravitz promises to play 8 (out of 97 musical instruments he can play) at his concert at Kala Academy tomorrow.

Lorraine Aloysius on the jhumpa and Kravitz on the guitar

One minute he’s sitting there at the lunch table, all prim and proper, nibbling on his salad, the next minute he’s cutting up a straw, rolling a piece of paper and filling an empty beer bottle with water. And then heads turn. There’s the music coming from?

Trust Israeli musician Tal Kravitz to create music where it is least expected and without a single conventional musical instrument in sight. But that’s just him.

It’s difficult to believe that at the age of 7 he was declared unfit to pursue music, by a professional music counsellor. He was crestfallen. But as a child with his heart set on music, he decided to turn a deaf ear to what the counselor had to say.

It took one year to build up his courage. He spent every night of the next three years creeping out of the children’s section of the Kibbutz Ramat Hakovesh (a community of 700 people), where he lived (two hours away from Nazareth), and sneaking into the music room to play on the community piano.

The two doors created a gap, small enough for him to fit in. In the pitch dark he would search for the right notes to Israeli classics and let his ear lead him on.

Why did he do it? He recites a phrase in Spanish to explain his reasons. “If a singer shuts his voice then life itself will be shut, since life is worth nothing without song.”

Then one day when he was 12, he got caught. At the small court session held especially to decide how to punish him, among the many charges the community members levied against him, was that he ‘caused the gap in the door to the piano room to grow together with him’.

To add to his misery, vodka bottles were stored in the same music room. That was enough to set the community members speculating about his intentions.

Kravitz remembers the meeting like it was only yesterday. “One elderly lady then got up and said, ‘why are you assuming these things. Let the boy play’”.

And he was let scott free, not before being declared the personal pianist of the choir. But that was years ago. Post that incident, Kravitz went on to study at the Israeli Music Conservatory. He studied the violin and the double bass. Later, after he served in the army, he embarked upon a personal search for original tribal music which took him to far corners of the world.

Why this search for tribal music? “Because tribal music is natural and connected to the earth with no external influence,” he explains.

His aim was to go to places as far, remote and unique as possible and to reach where nobody has reached.

Once he went to the border of Kenya and Ethiopia in East Africa. He walked for three days to get to a community in the desert. He relates his experience and his findings.

“People live up to the age of 35 on an average there. They have never tasted salt or sugar. I handed a child a chocolate and he spat it out. They grind millets for food and their diet is devoid of nutrition. As a result a 35-year old looks like an 80-year old. The people there don’t die from hunger, they die from old age. They had never seen a white person before and the children began began crying because they thought I was a ghost.”

East Africa and Papua New Guinea are some of the places he’s reached, photographing the indigenous tribes’ lifestyles and recording their music as it was sung and played for thousands of years. Kravitz uses this material to advocate for ethno-musicological research of societies whose traditions and music are in danger of extinction.

It is experiences like this that keeps Kravitz alive. He also conducts workshops for children, inculcating a love for music in them and teaching them to make musical instruments.

At the concert in Kala Academy tomorrow that is free and open to the public, Kravitz accompanied by Lorraine Fiona Aloysius on the Steinway piano will play folk songs from Israel and India.

Lorraine will perform an Israeli classic ‘Hayu Laylot’ and Kravitz will stun the audience with a Bollywood item song. The duo is also working on a Konkani classic for the special evening.

Kravitz will play ‘Ave Maria’ on a musical saw and swears that will sound like a dramatic opera singer. He will play the flute using his nose, the guitar, the bagpipe, the Mashrukitah, an ancient biblical flute played at the Holy Temple and the Adongo, an African percussion instrument among others.

One of the highlights of the evening will be when Kravitz will play a instrument without even touching it. He refuses to disclose its name. And no, it’s not a wind instrument.

Kravitz plays 97 musical instruments including the harp, a variety of bagpipes and African percussion instruments among others. During his 11 years on the stage, he has given about 1,500 performances, lectures and workshops.

What advice does he have for children starting out in music? “Never play an instrument that you don’t like. And never play when you are forced to do so. It is very wrong to play by force. Plus if everybody played music then there would be no one to listen and appreciate,” he believes.

Watch out for his performance in Goa at 6:30pm at Kala Academy. 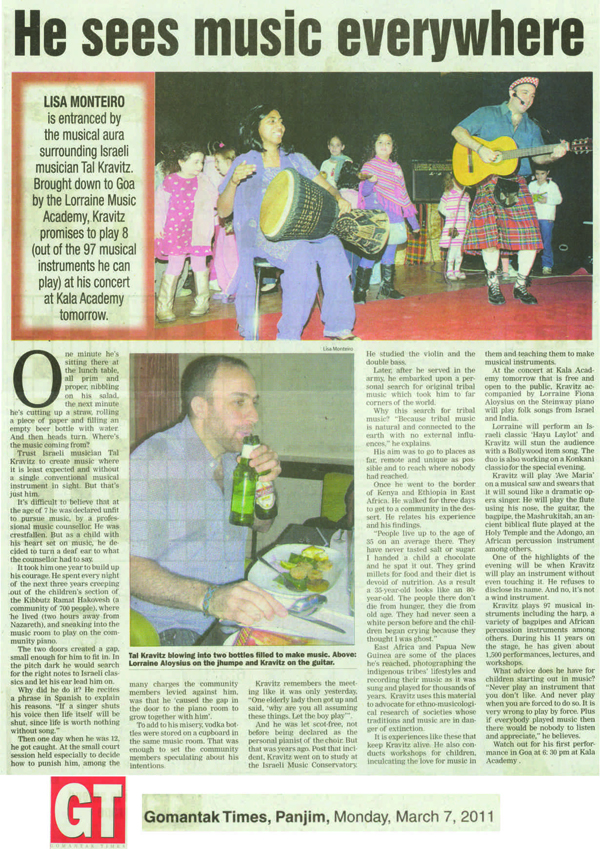