The dynamic, versatile & spontaneous couple, AUBREY ALOYSIUS & LORRAINE FIONA ALOYSIUS, received an award for their commendable work in the field of SOCIAL SERVICE, MUSIC, ART & CULTURE. The couple was felicitated with the coveted ‘KARMAVEER PURASKAAR’ award on 26th November 2012 in New Delhi at the exclusive awards function which is a part of iCONGO’s REX GLOBAL CONCLiVE.

“iCONGO congratulates Aubrey Aloysius & Lorraine Fiona Aloysius for possessing the conviction and compassion to stand up, speak out and lead the change with their positive attitude”, says JERONINIO ALMEIDA, Founder of iCONGO & REX. “The management of iCONGO has selected their nomination after thorough due diligence based on the process created by the international HR audit firm MERCER and Grant Thornton. We marvel at the amazing work carried out by the couple in the area of Music, Art & Culture.”

“LAMP plans to use music & art education to help children and the youth, including those from impoverished circumstances, achieve their full potential and learn values that favour their growth and have a positive impact on their lives in society. Through our music, arts and social project, we wish to offer instruments, equipment and tuition through a network of after-school centres all over the country. We have already begun our work with about 300 children in Gurgaon through one of our patrons, Lorraine Music Academy. We plan to extend and expand this reach and seek the help of the community to enable us with our vision”, says Aubrey Aloysius, Founder Trustee & President of LAMP Trust.

Lorraine Fiona Aloysius, Director, Lorraine Music Academy, says, “Music education has the power to bring about a high level of discipline among those who study it diligently. My dream is to impact the nation through my work in the field of education – music education, arts education and general education. I want to play my part in teaching the rich and the poor to appreciate and learn and share music. We desire to gather, understand, appreciate and patronise music, instruments and musicians from all parts of India, and form the “Great India Instrumental Orchestra.”

The “KARMAVEER PURASKAAR” awards ceremony has over the years become a “MELTING POT” where people from India & Global Citizens come “TOGETHER as ONE to RIGHT every WRONG”.   The CtrlS – iCONGO promoted “KARMAVEER PURASKAAR (KVP)” are the Global Awards for Social Justice and Citizen Action, instituted by the people sector & civil society with various partner organisations, citizens at large and media supporters.

iCONGO, in association with CtrlS, VSO India and SOAP, has also launched Karmayuga-Right every Wrong Generation, an initiative that salutes and showcases the extra ordinary and inspiring work done by ordinary mortals, to Right a Wrong that they see around them. Best Citizen Action stories are awarded the Karmaveer Chakra – a medallion for proactive Citizen Action, instituted with the United Nations. 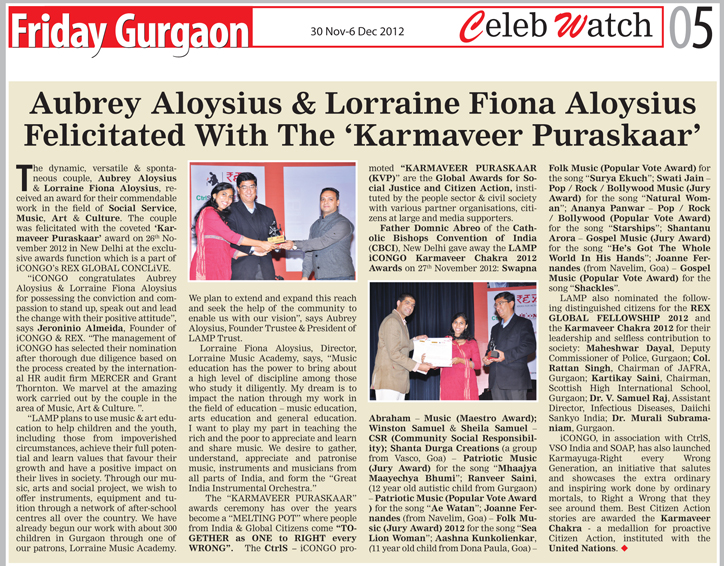 DELHI IS A ROMANTIC PLACE

THE THINKERS’ FORUM with DR. VISHAL MANGALWADI
Scroll to top