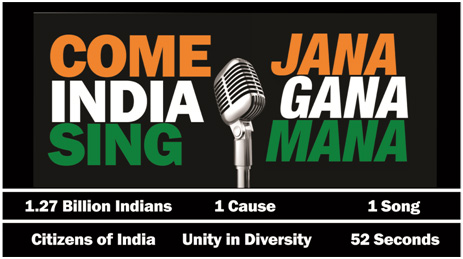 OPEN TO ALL AGES!!

We take this opportunity to invite you, your family and your organisation to participate in the National Patriotic Project “Come INDIA Sing Jana Gana Mana” and make a mark on the next generation of India. The Project is conceptualised and initiated by Lorraine Music Academy in aid of LAMP Trust.

India is young! India’s biggest asset is its young population. The spirit and motivation of the youth of this country will determine the direction the economy takes and help turn India’s fortunes. They will help make a big difference to the way India finds its true place as one of the world’s leading and influential nations during the next couple of decades. They will prove pivotal in making India a world leader in the coming years.

We aim to rekindle and build a National fervour of Patriotism and motivate the youth to build their lives positively to contribute to India. India is a nation with a multi-faceted and diverse cultural heritage. We can build solidarity through appreciation of our cultural diversity, acting on the principle that the understanding and appreciation of diversity is a powerful unifier – that our most important similarities, human common ground, are to be found in our distinctive histories of expression. Nowhere is this potential for positive fusion more evident than in the nation of India. Through this National Patriotic Project we will empower our children and youth to build on the nation’s cultural ethos of “Unity in Diversity”.

Music and the arts are as important to society as reading, writing, and arithmetic, not just as a disposable extra. Exposure to music and art has a profound impact on individuals. Plato said over two millennia ago, “Let me make the songs of the nation and I care not who makes its laws”. In selecting the first song that could be re-taught to the nation, we chose the one song that is understood and sung by the whole nation, our National Anthem. Other songs will follow. When this musical imagination and experience is ignited in a group circumstance, we have the most extraordinary power to change young lives for positive living.

The Project envisages to reach out to the Children & Youth of India to teach them to sing our National Anthem in the correct way as per the code laid out in the Constitution of India, with precision, pride and passion. The outreach programs will be done through contact programs in Schools, Colleges, Work Places, and through communication in print, electronic & social media.

The project will include wave upon wave of live interactions with our next generation. The project has various components including music & performing art education, training, audition, talent development, films, ‘edutainment’, cultural programs, events, concerts, contests, acknowledgements, recognitions, and awards on a national and global scale.

As a small beginning, Delhi State Government has already opened up 2,000+ schools to us across the NCT of Delhi, allowing us to reach out to 27+ lakhs students and their families. We will endeavour to reach out to each of the 29 States and Union Territories across India.

Here is a link to some of the News & Media articles we have received in the recent past: Print Media & Electronic Media