TIME TO SING ALONG

MEET Aubrey Aloysius, Founder And Chairman Of The National Patriotic Project, Which Seeks To Rekindle Patriotic Fervour Among The Youth Through Music

“Unity in diversity” is the most widely used phrase to describe India and its cultural potpourri. For Aubrey Aloysius, founder and chairman of the National Patriotic Project: “Come India Sing Jana Gana Mana”, it encapsulates his experience of growing up.

“From an early age, I have liked to identify myself as an Indian rather than as hailing from a part of the country, and the National Anthem has been a song that has always inspired in me a feeling of belonging to a family larger than and beyond my own at home, a sense of belonging to a nation. I would see in it a prayer to the Almighty for the future of India and strongly feel that it has the power to bring people together,” he says as he recalls the origin of the concept that fuses music with patriotism.

“Come India Sing…”, launched in August 2013, aims to work towards rekindling a national fervour among children and the youth in particular. Consisting of an annual online and offline talent contest, cultural events, concerts, etc., it plans to reach out to every Indian through various initiatives spread out over several years.

“A Punjabi boy can be taught a Bengali song and through it he can be introduced to another culture and be taught to appreciate and respect it. This is also a way of bringing about national integration. Music, I feel, can be a great unifying force and can play an important role in building the character of our future generation as well as of our nation itself,” he asserts.

Aloysius feels there is no better way to do this than by re-teaching them a song they all know and understand: the National Anthem, sung in accordance with the code laid down in the Indian Constitution whereby it has to be sung in 52 seconds to a martial tune on a particular beat.

“We are saying come sing Jana Gana Mana, but our events and initiatives are also about singing any other song that you like, from the State you’re from. The young generation is looking so much to the West nowadays that they’re not only forgetting their culture but beginning to repel it. What we want to do, therefore, is to rebuild their pride in their culture by connecting them to its roots,” he adds.

On the response so far, he says that he has been amazed: “I’ve had calls from so many schools asking if they can participate, and coming to us without invitation. Doordarshan has been very supportive right from the beginning and last year, the then Delhi government helped us gain access to more than two thousand schools across Delhi NCR. We are waiting for the right time to approach the present Chief Minister and Education Minister, let’s see how things go,” he says and signs off saying, “I’m very happy that I can contribute in a small way to this country and really hope this project becomes an avalanche,  because India really needs positive change.” 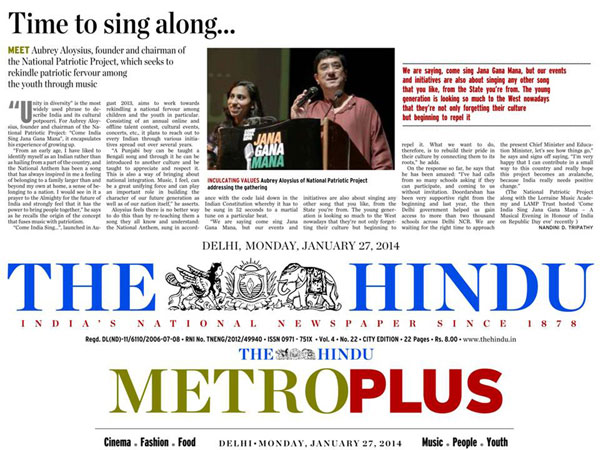 A MUSICAL EVENING OF PATRIOTISM

SING ALONG
Scroll to top