MUSIC AND ART ADD COLOURS TO THIS HOLI

MUSIC AND ART ADD COLOURS TO THIS HOLI
– An article in The Times of India, Gurgaon, 17March2014

GURGAON: Residents welcomed the festival of Holi with multi hued performances across the city. Various artists showcased Holi-themes performances at a music academy, a resto-bar and RWAs.

Ganesh Mohan, a 29-year-old Coimbatore-based aeronautical engineer and an award-winning dancer, was in Gurgaon this weekend to present a fusion dance performance on Saturday at Epicenter. "The performance which I gave was a mix of Tamil folk, Odissi, Kathak and Western. I also did a bit of juggling and skating," he told TOI.

The musical night was followed by painting -another medium of expression – in sync with music and songs. "We called a painter who painted to articulate a song onto a canvas," Aubrey says…..

…Some of the condominiums in town have invited DJs to perform at their townships to celebrate Holi. "We have called DJ Gaurav Chawla from Delhi," said Savita Malhotra, president of Belvedere Park Residents Association. 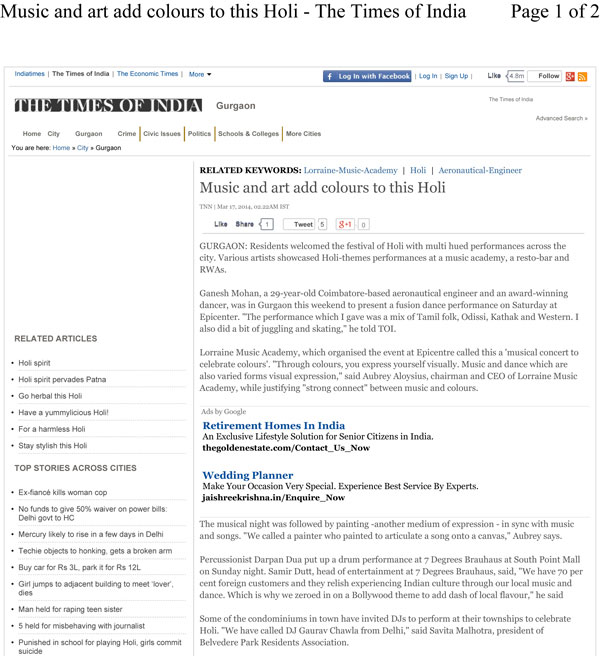