The Lorraine Music Academy is teaching young kids to express themselves in song.

With the fog in the Capital comes that good ol’ feeling of Christmas, and with a carol carnival in town this Wednesday, the festive bells seem to be ringing already. An interesting initiative by the Lorraine Music Academy and LAMP Trust – Come India Sing A Christmas Carol – aims to encourage caroling across the national capital region among the young and the old alike, and help people express themselves in song and speech.

The musical evening, which will take place at 7.30pm on December 11 at Epicentre Auditorium in Gurgaon’s Sector 44, will include performances by children and youth, and also participating actively will be the expat community. Participants will express themselves in performances on the piano and various instruments, speeches and poems. They will sing carols and play Christmas music to herald the season’s spirit of giving and sharing. “Music is food for the soul. A good diet of the right kind of music gives you mental, emotional, intellectual and spiritual stability. Music helps the creative process and sparks the imagination. When this musical imagination is ignited in a group circumstance, we have the most extraordinary power to change young lives for positive living and nation-building,” says Aubrey Aloysius, founder of the Lorraine Music Academy and LAMP Trust.

The event will also have the audience singing the National Anthem with precision and pride as part of the ‘Come India Sing Jana Gana Mana’ project – a clarion call to all to stand up for the unity of India by singing one song – our National Anthem, in the correct code as laid out in our Constitution. 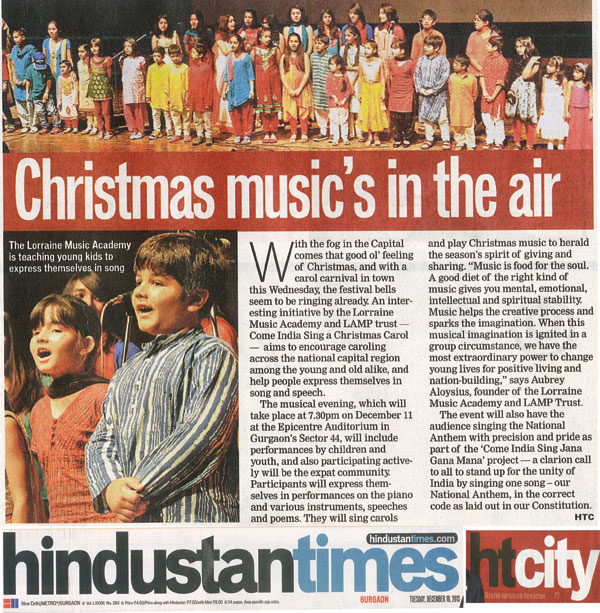