Lorraine Music Academy held a cultural event recently. The audience of 300 children, youth & adults together read out the Preamble of the Constitution. Aubrey Aloysius, founder of the Lorraine Music Academy and the LAMP Trust and chairman of the National Patriotic Project, touched upon the need to focus and include the poor in nation building. He also spoke about initiatives towards this direction by the recent launch of the ‘Pradhan Mantri Jan-Dhan Yojana’, ‘Swachh Bharat Abhiyan’ and ‘Beti Bachao, Beti Padhao’ campaign.

The concert began with a bang with students of the academy singing a song with tri-colour kites held high titled ‘Let’s Go Fly A Kite, Up To The Highest Heights’. Lorraine Fiona Aloysius played the Piano while she sang along with the children the famous Bengali folk song ‘Dhitang Dhitang Bole’ and a Konkani song from Karnataka ‘Sanjaya Cha Vellar’ (our country is beautiful, may God bless our country). The youth choir of the institution touched the hearts of people by singing a spiritual song ‘You Raised Me Up So I Can Stand On Mountains’.

This concert was in aid of raising awareness, support and resources for the “Come India Sing…” series of nation building initiatives utilising music as a tool. This series of initiatives, events & participative activities forms a part of the ongoing National Patriotic Project “Come India Sing Jana Gana Mana” that was launched on 15th August 2013. 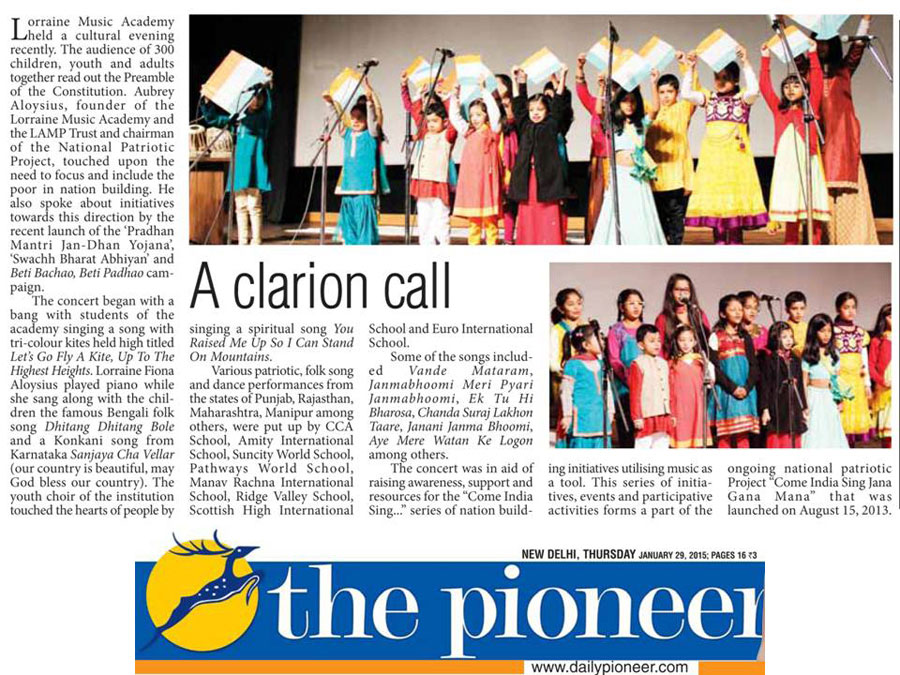