The students of Lorraine Music Academy and schools across the National Capital Region will express themselves through music by playing instruments and singing songs that make them happy. There will be solo singing and group, choir singing performances of patriotic songs and folk songs from across North (Punjab, Rajasthan), South (Karnataka), East (Bengal, Mizoram) & West (Maharashtra) India. Songs such as Vande Mataram, Janmabhoomi Meri Pyari Janmabhoomi, Ek Tu Hi Bharosa, Chanda Suraj Lakhon Taare, Janani Janma Bhoomi, Aye Mere Watan Ke Logo would be sung among many others. There will be dance performances set to patriotic and folk music. It will include performances children and youth.

The event will also have the reading of the preamble of the Constitution of India.

This concert is in aid of raising awareness, support and resources for the “Come India Sing…” series of Nation Building initiatives utilising music as a tool. This series of initiatives, events & participative activities forms a part of the ongoing National Patriotic Project “Come India Sing Jana Gana Mana” that was launched on 15 August 2013, our Independence Day. 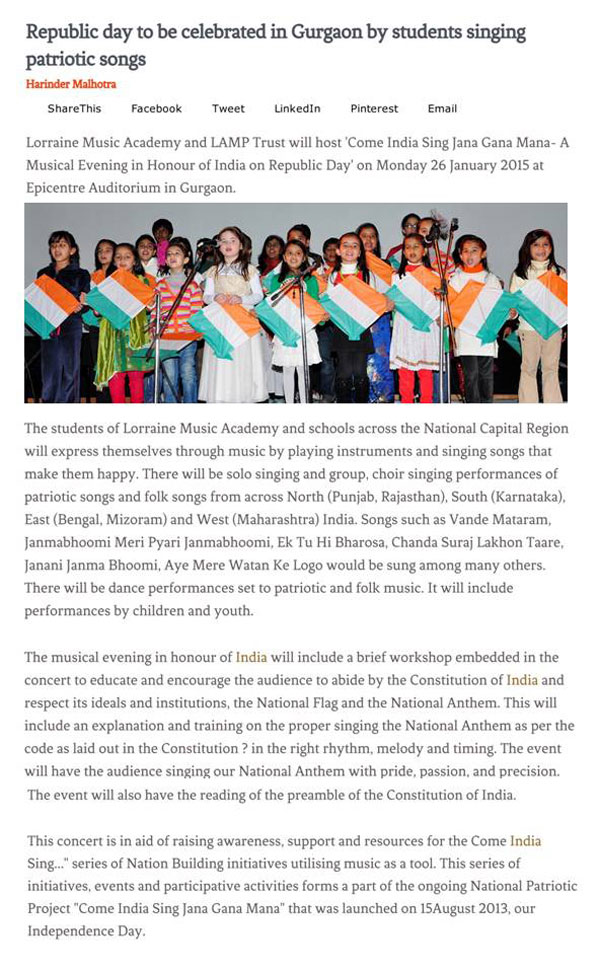