Tel Aviv-based musician Tal Kravitz, who is know for playing more than 100 world instruments, in on his maiden India tour

The musical saw, in the hands of a novice, can be a very tricky instrument to play. Unlike its cousin, the ordinary carpenter’s saw, this thin strip of metal comes without any serrated edges. Yet it’s capable of inflicting serious injury, Tal Kravitz, a traveling Israeli musician, however, looks totally at ease, as he sits nursing the instrument in the Sacred Heart Cathedral, opposite the Gole Dak Khana, and introducing the assembled guests to the harmony it produces. “The more you bend the blade, the higher the pitch of the sound will be,” he says, gentling guiding the violin bow over one side of the saw.

Kravitz is in India at the invitation of the Israeli Embassy for performances in Delhi. The 36-year old Tel Aviv-based musician has been playing the musical saw for the past 22 years and enjoys the distinction of playing close to 100 other unheard of world instruments. “My home has run out of space for these instruments on the wall as well,” he grins. A musical gypsy of sorts, a variety of Scottish bagpipes, the musical saw, and a rare flute called the Mashrukita, which was played by priests of the Holy Temple in Jerusalem in 2nd century BC. In fact, he travels from place to place and picks up rare instruments to play. The musical saw, for instance, is a Russian inheritance, learnt from a Russian-Jewish friend in Israel.

After training in classical music and choir conducting from the Israeli Music Conservatory, Kravitz decided his purpose as musician was to go beyond cutting record deals and creating albums. He maintains a website and posts his tracks online earning money from concerts across Israel. “I want to explore cultures whose musical traditions are in danger of extinction,” explains Kravitz, whose first trip outside Israel was to Papua New Guinea in 1994, where he worked with the indigenous tribesmen. His most frequent destination has been to Africa – to western Kenya, where he has worked with the Baluya tribe over the years. “They have a unique way of welcoming strangers. They will spit on their hand and touch it to your face to welcome you in their community,” he smiles.

As part of his first India tour, Kravitz also jammed with a few lesser-known Delhi based Indian classical musicians like Surjit Singh on the sitar, Mahesh Prasad on the basuri, Lorraine Fiona Aloysius on the piano, Meena Rajan on vocals, Karun Chakraborty on the harmonica for a performance at the Alliance Francaise, on Lodhi Estate, on Monday. “I am mesmerized by the bulbul tara at present. One of my Israeli friends gifted it to me and I am mastering it slowly,” says Kravitz, who will conduct a music workshop with children of Scottish High International School, Gurgaon, today, organized by the Gurgaon-based Lorraine Music Academy. There are other workshops planned over the week. 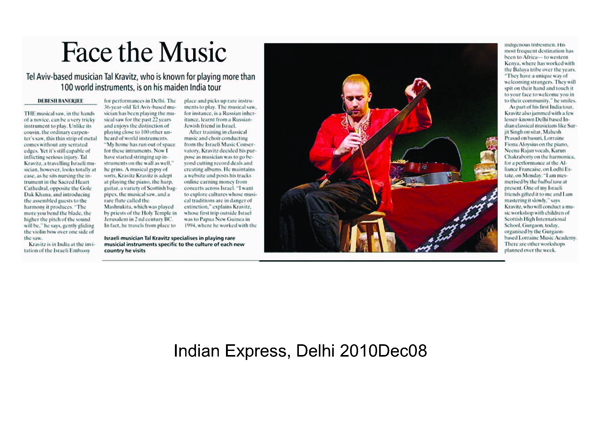 Wacky side up
Scroll to top