Much has been spoken about Gandhi and Nehru as India projected them to the world. However, in the process of celebrating one figure, we often forget another. Attempting to circumvent this precise scenario is ‘Lal Bahadur Shastri – A Hero of War and Peace’, the work of documentary filmmaker, Aubrey Aloysius

The oddest chance meeting with someone can spur us on to so much more, much like the Domino or Butterfly Effect. This is precisely the path that unfolded for documentary filmmaker, Aubrey Aloysius after having met and interviewed live on stage the youngest daughter-in-law of Lal Bahadur Shastri, Neera Shastri at an event called ‘A Musical Memorial – Remembering Mahatma Gandhi and Lal Bahadur Shastri’.

This encounter was one that motivated him so much, that he decided to make a documentary on the subject, and went on to meet  Lal Bahadur Shastri’s sons, Sunil and Anil several times, who guided him and provided him with valuable insight and information during his period of research. Aubrey currently has, in the works, a documentary film on Bharat Ratna Lal Bahadur Shastri, the second Prime Minister of India, which is set to be released nationally and globally later this year. Aubrey has also produced a number of cultural events focused on the performing arts in the National Capital Region and has also produced a number of short films promoting national unity and patriotism. Several of these films have been telecast nationally and internationally on Doordarshan. He has also been featured on Lok Sabha Television. Aubrey will also go on to produce a full-length feature film for a national and international audience.

However, in keeping with this, one can’t help but wonder why Aubrey picked to specifically focus on the life of a man who is often unfortunately perhaps regarded as one of the ‘lesser-known’ names of the time. “It was 50 years ago, on January 11, 1966 in Tashkent that Lal Bahadur Shastri passed away. However, to those that remember his contribution to the country at large, he still lives on in their hearts. In many ways, his story is similar to that of President Abraham Lincoln of the U.S.A. who rose from a log-cabin to the White House. Lal Bahadur Shastri’s story is of a modest young boy who was born on the banks of the river Ganga and rose to be a Bharat Ratna. Through his dedication and by virtue of his character, he rose steadily to occupy the highest position in the land,” he explains.

Aubrey Aloysius has interviewed every living member of the Lal Bahadur Shastri family in order to gain a powerful and deep insight into the life of this great man. “The stories that they told me, reduced me to tears. We are talking about a man who put his country first; a man who spent more time in jail than out of it, purely for standing up for what he believed in; a man who lived in abject poverty and lost two children to illness, purely because he could not afford to pay for their medical expenses,” he adds emotionally.

Aubrey, who is also the founder of the Lorraine Music Academy and the LAMP Trust, and Chairman of the National Patriotic Project, talks about the importance of the film to the next generation, saying, “The purpose of this project and films is to reach and impact each of the 1.27 billion citizens of India. It is important that the children and youth of our nation know and understand the life of Lal Bahadur Shastri – his everyday life as a child with meagre means, his struggle to get himself educated, a sacrificial life as a freedom fighter. He was a man of high moral principles, values and ethics, who with integrity and character crossed all bridges and held the highest Indian office with courage, integrity and utmost dignity. He was a legendary leader, successful and blameless both in public and private life. His thoughts and actions need to be perpetuated and carried forward in order that the life of the Indian citizen, and human being at large, can be transformed. His principles, values, ideals and thoughts must be held up as a lamp to India and the world. Even though he died 50 years ago, his legacy will live on forever.” 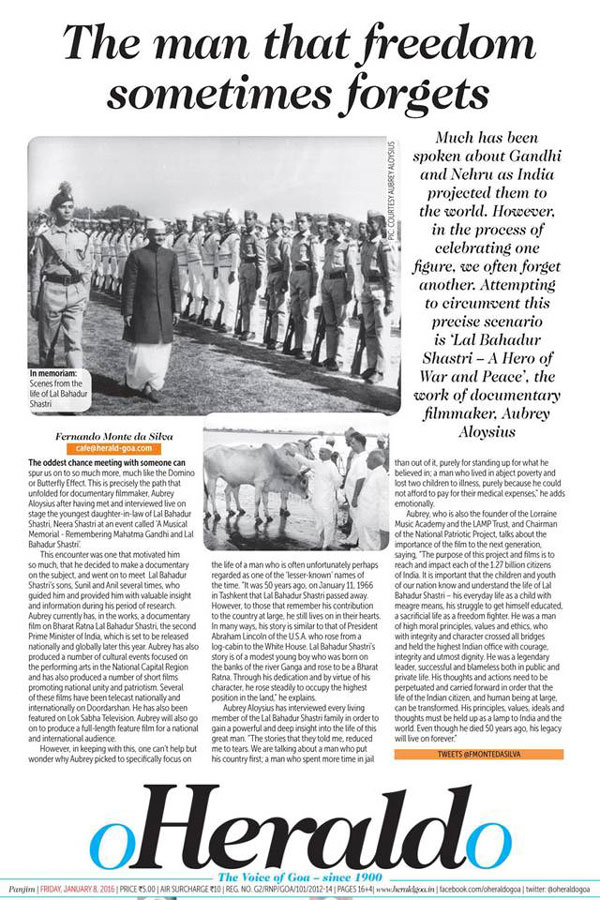