Musical evening for Gurgaon on the eve of Holi

Musical evening for Gurgaon on the eve of Holi
– An article in MeriNews.com  – 20March2014 (Harinder Malhotra)

The festival of colours in Gurgaon was spent in a magical way at Epicentre by Lorraine Music Academy and LAMP Trust. They hosted “Come India Sing A Festive Song – A Musical Evening Celebrating Colours” on the eve of Holi Festival, on Saturday 15th March 2014.

It was the first time ever that a creative way of celebrating Holi in an auditorium integrating instrumental music, singing, dance performances and painting of colours were initiated. The audience witnessed musicians, singers, dancers and visual artists – both professionals and children of all ages – performing together on stage to an enthusiastic and participative audience.

The final act was the painting of patriotic rainbows by children using the colours saffron, white, green and blue. Aubrey Aloysius conducted a brief workshop to educate and encourage the audience to abide by the Constitution of India and respect its ideals and institutions, the National Flag and the National Anthem. This included an explanation on the proper singing of the Indian National Anthem, Jana Gana Mana, with pride, passion, and precision, in the right rhythm, melody and timing – in 52 seconds.

The audience left the auditorium feeling bright, happy, exhilarated and surprised that they could celebrate Holi in an auditorium by splashing colours on canvas while simultaneously enjoying the colourful music and vibrantly colourful dances. 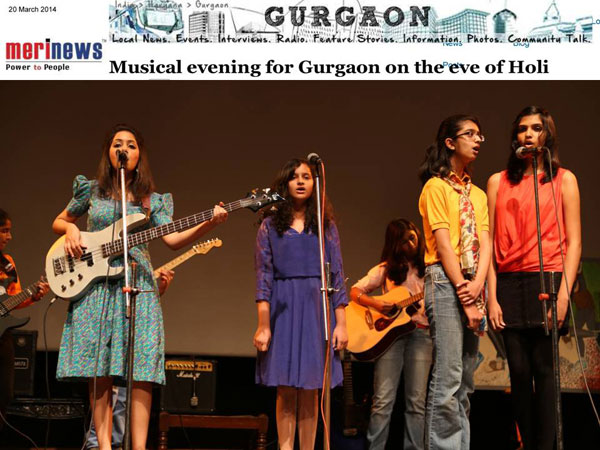 MUSIC AND ART ADD COLOURS TO THIS HOLI