Among the cultural capitals of the world, the name of Vienna still figures as the most prominent in historical memory. Western classical music, and the collective genius of some of the greatest composers of the two ‘Viennese Schools’, came into its own in this city. Music lovers in Gurgaon can now relive some bits – or bars, to use the language of music – of that past right here.

Two renowned musicians from Vienna – Marialena Fernandes and Ranko Marcovic – will be in town this Sunday to conjure up the spirit of the past that was best captured in musical notes. They will be performing along with Lorraine Fiona Aloysius, who runs a music academy here, which is organizing the event.

Samples from the works of the Viennese master Johann Strauss, the Russian romantic Pyotr Ilyich Tchaikovsky, and one of the pioneers of modernism in music Arnold Schoenberg, will be presented by the three musicians at the evening concert to be held at the Epicentre.

Of the Austrian musicians, Fernandes, who was born in India, works as the professor of chamber music at the University for Music and Performing Arts in Vienna; and Markovic is the artistic director at the Konservatorium Wien University.

Sunday’s event also seeks to confirm universality of music by showing how thoroughly the Viennese waltz was adapted by Bollywood composers. 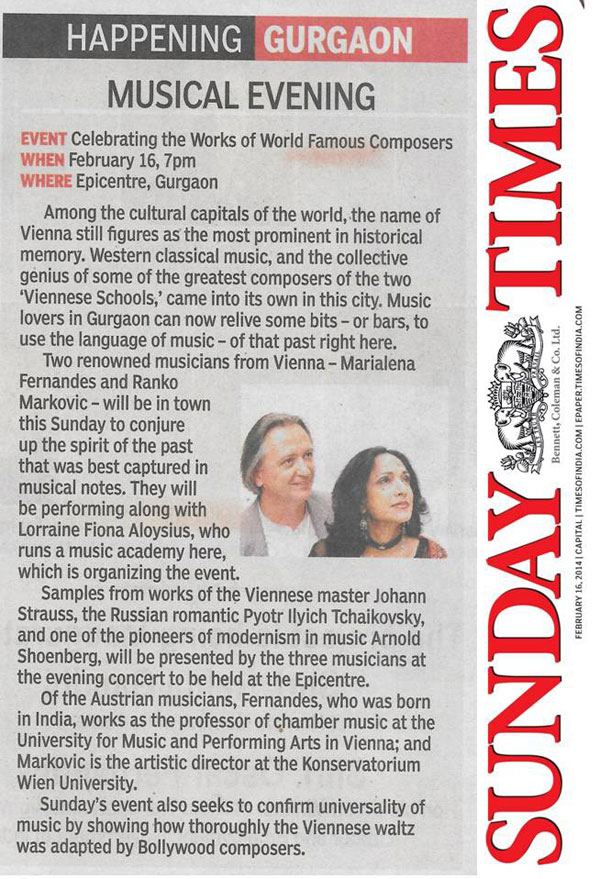