Gurgaon: In a tribute to former PM Jawaharlal Nehru, the Lorraine Music Academy and LAMP Trust will host a musical memorial on Tuesday in Gurgaon. The event is part of the ongoing National Patriotic Project – Come India Sing Jana Gana Mana – launched on August 15 this year.

The musical memorial will include performances by children and the youth who will express themselves through songs, dance performances, musical instruments and poems.

The National Patriotic Project is a call to 1.27 billion Indians to stand together for the unity of India by singing one song, the National Anthem, in the code laid out in the Constitution of India.

“Music is food for the soul. Good food and good excercise gives you good physical stability. A good diet of the right kind of music gives you mental, emotional, intellectual and spiritual stability. Music helps the creative process and sparks imagination and ideas. When this musical imagination and experience of singing our National Anthem is ignited in a group, we have the most extraordinary power to change young lives for positive living and nation-building,” said Aubrey Aloysius, founder of the Lorraine Music Academy ad the LAMP Trust, and Chairman of the National Patriotic Project. 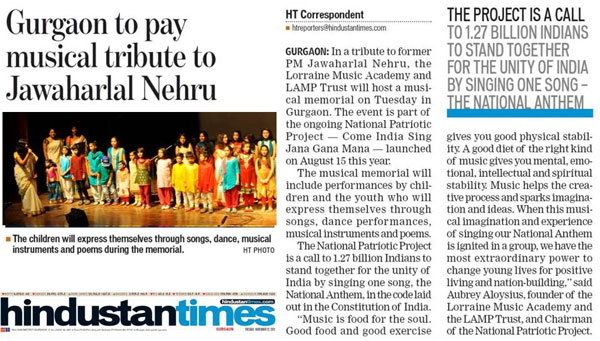