Deadline for the Nation-wide “SING A SONG” Contest is extended to 15 November, 2012

Deadline for the Nation-wide “SING A SONG” Contest is extended to 15 November, 2012

Aloysius, Founder Trustee of LAMP Trust, has announced that the last date for receiving the entries to the National SING A SONG Talent Contest to win the the award of the LAMP – iCONGO Karmaveer Chakra Award for Music has been extended after persistent requests that the last date for online application coincided with the festive holiday season. Entries can now be submitted by 15 November 2012 for the 2012 Awards.

At a media conference in September 2012 organised in Panaji, Goa by the Kala Academy Goa, the Chairman of Kala Academy, Mr. Vishnu Surya Wagh, announced the association of Kala Academy Goa with Lorraine Music Academy and LAMP Trust in launching in Goa the annual nation-wide talent contest “SING A SONG” for the LAMP – iCONGO Karma Veer Chakra Award for Music, a coveted annual award instituted alongwith United Nations. This contest is open to everyone of all age groups across Goa and the nation and that language was not a bar.

Mr. Wagh announced that, in order to facilitate an opportunity for anyone across Goa who lacks the necessary infrastructure, two days will be set aside at Kala Academy premises in Panaji for the purpose of helping record the contest participants’ performance on video, upload on YouTube and submit the contest entry online. Thus, Kala Academy would help contestants to shoot and upload videos. The Academy will announce the details of the arrangements and the dates shortly.

Speaking about the association with Lorraine Music Academy and LAMP Trust, which are based in Gurgaon, near New Delhi, Mr. Wagh gave an assurance for conducting a Goa Music & Art Festival in Gurgaon. “We want to take our Goan art to Northern states of the country. We are planning to start the Goan Art Festival which will showcase the panorama of Goan art,” added Mr. Wagh. He mentioned that the event will be held tentatively in the month of March 2013. 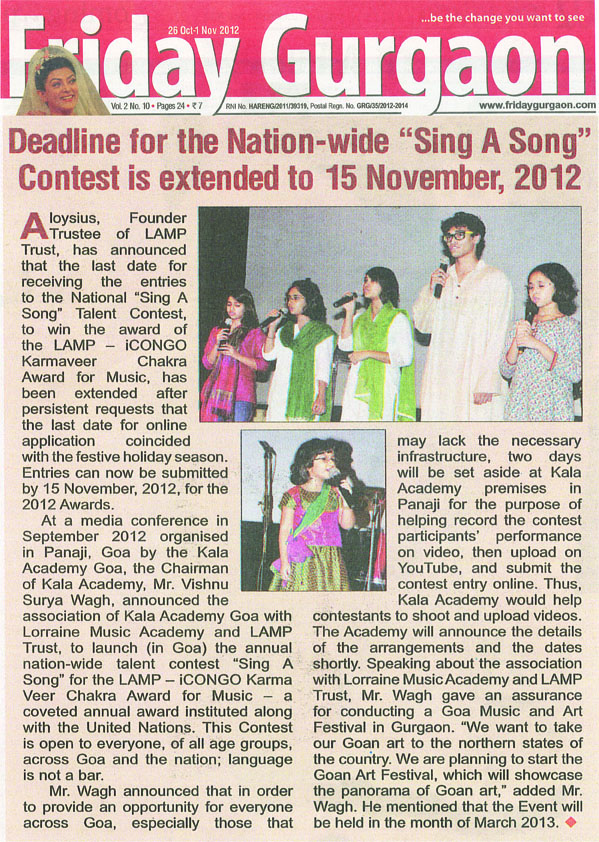 AUBREY & LORRAINE ALOYSIUS TO BE FELICITATED WITH THE ‘KARMAVEER...
Scroll to top