“Despite all odds, the national anthem echoes sentiments of brotherhood and patriotism in every Indian’s heart.” – OSCAR FERNANDES, Minister

“As part of a contest, people can upload their music video on YouTube and register at the academy’s website.” – LORRAINE MUSIC ACADEMY

In a splendid show of patriotism, hundreds of denizens gathered at the city’s cultural hotspot Epicentre on Thursday and sang the national anthem during the launch of the ‘Come India Sing Jana Gana Mana’ campaign.

The aim is to bring on board one crore citizens of India, said Aubrey Aloysius, managing director of Lorraine Music Academy which is organising the campaign.

Union minister for road transport and highways Oscar Fernandes, who was present on the occasion, said binding people through the national anthem was a noble idea at a time when India was facing challenges from divisive forces.

“Despite all odds and differences, the national anthem echoes sentiments of unity, brotherhood and patriotism in every Indian’s heart,” he said.

Those present at the occasion were left spellbound by the performances of school children, trained artistes from the Lorraine academy, and the AR Rahman Music School.

As part of its programme, Lorraine academy has launched a contest. The participants can upload their music video on YouTube and register at the academy’s website.

Aloysius said that selected participants and winners of the contest will get opportunities to perform on stage before live audiences in the national Capital region and elsewhere in the country.

“The idea is to get thousands of people singing the national anthem together at a single venue. We plan to get it broadcast on a national channel to invoke feelings of patriotism among all Indians,” Aloysius said. 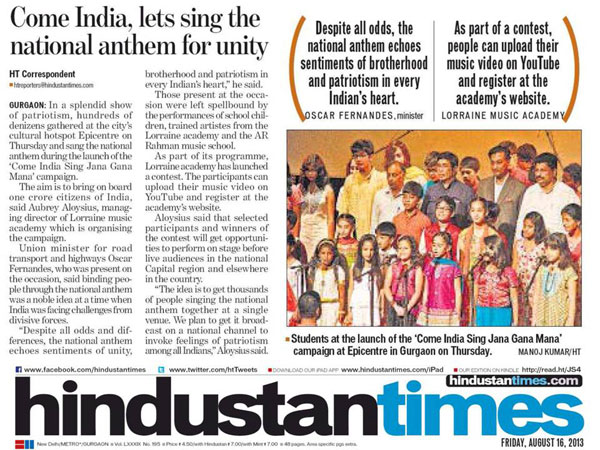