CITY TO PAY TRIBUTE TO GANDHI ON OCTOBER 2

Gurgaon: Followers of Mahatma Gandhi are in for a treat as the city will pay tribute to the father of the nation through a musical memorial on his birth anniversary, October 2.

Organised by Lorraine Music Academy and LAMP Trust, the musical tribute – ‘Remembering Mahatma Gandhi – A Musical Memorial on Gandhi Jayanti” – will be held at Epicentre auditorium.

Union minister for road transport and highways Oscar Fernandes will preside over the programme, which is a part of the ongoing national project ‘Come India Sing Jana Gana Mana’ launched on August 15.

The project is an initiative to unite Indians through the recital of the national anthem.

This pan-India talent contest is open to all with no age-bar, where participants need to record a video, upload it on YouTube and fill in the registration form available on the academy’s website. The participation can be individual or in a group.

THE PROGRAMME IS A PART OF THE ONGOING NATIONAL PROJECT ‘COME INDIA SING JANA GANA MANA’ LAUNCHED ON AUGUST 15. 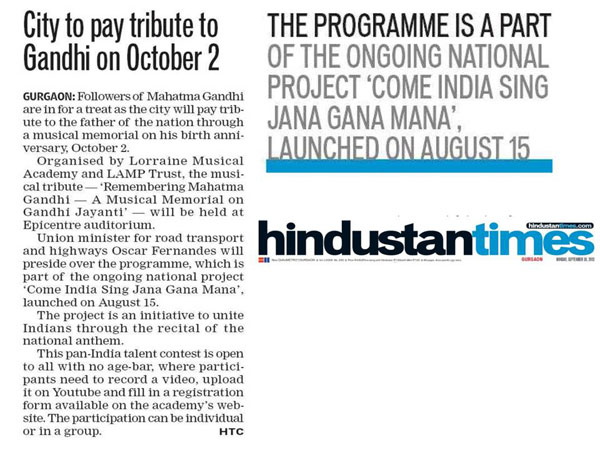