AUBREY & LORRAINE ALOYSIUS TO BE FELICITATED WITH THE ‘KARMAVEER PURASKAAR’

AUBREY & LORRAINE ALOYSIUS TO BE FELICITATED WITH THE ‘KARMAVEER PURASKAAR’

The very versatile & spontaneous couple, Aubrey Aloysius & Lorraine Fiona Aloysius, are set to receive an award for their commendable work in the field of social service. The couple will be felicitated with the coveted ‘Karmaveer Puraskaar’ award on the 26th of November 2012 in New Delhi at the exclusive awards function which is a part of iCONGO’s  REX GLOBAL CONCLiVE, being organised on 25th, 26th and 27th of November 2012.

“iCONGO congratulates Aubrey Aloysius & Lorraine Fiona Aloysius for possessing the conviction and compassion to stand up, speak out and lead the change with their positive attitude”, says Meenu Chopra, Executive Founding Director of iCONGO.

“LAMP plans to use music & art education to help children and the youth, including those from impoverished circumstances, achieve their full potential and learn values that favour their growth and have a positive impact on their lives in society. Through our music, arts and social project, we wish to offer instruments, equipment and tuition through a network of after-school centres all over the country. We have already begun our work with about 300 children in Gurgaon through one of our patrons, Lorraine Music Academy”, says Aubrey Aloysius, Founder Trustee & President of LAMP Trust.

Lorraine Fiona Aloysius, Director, Lorraine Music Academy, says, “Music education has the power to bring about a high level of discipline among those who study it diligently. I want to play my part in teaching the rich and the poor to appreciate and learn and share music.”

The CtrlS – iCONGO promoted “KARMAVEER PURASKAAR (KVP)” are the Global Awards for Social Justice and Citizen Action, instituted by the people sector & civil society with various partner organisations, citizens at large and media supporters. Be the change you want to see in this world is what every KARMAVEER inherently believes and practices. It is the first award of its kind from India – and probably around the globe – that has been held every year for the past 5 years, at a very austere, simple and dignified program in New Delhi.

The awards and the Chakra recognize and applaud the social commitment of concerned individuals, who have proactively and voluntarily worked for bringing a positive transformation in the society and the world we live in. In today’s world where there is huge apathy & indifference, we feel a paramount need for being not just a good person but also a good citizen who exercises her / his rights, duties & responsibilities as a concerned, just and humane citizen. 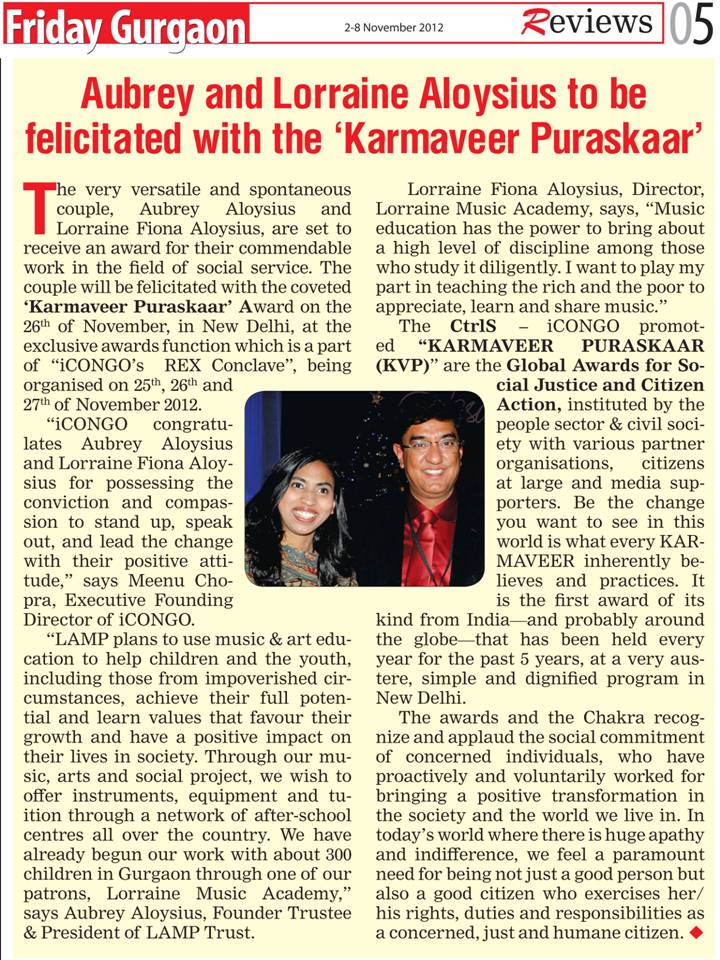 Deadline for the Nation-wide “SING A SONG” Contest is extended to...