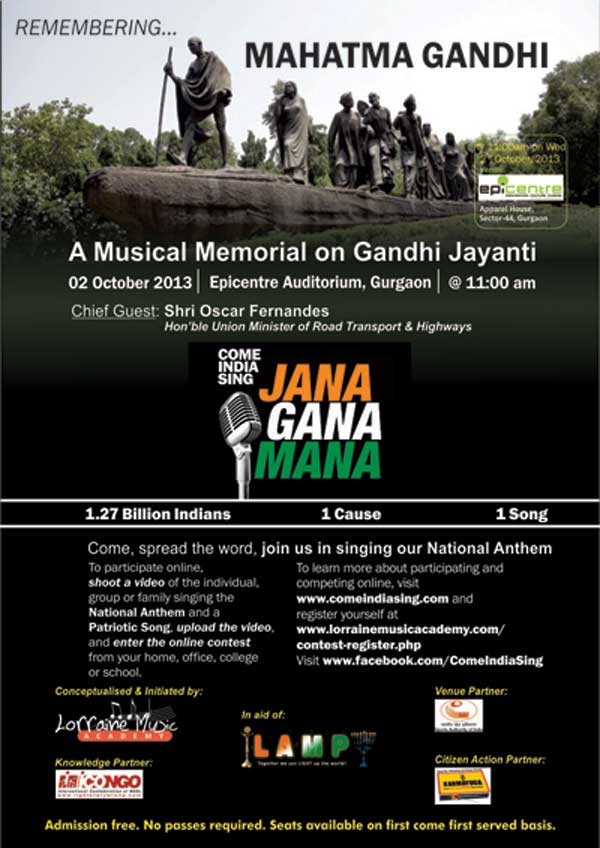 The musical memorial will include performances of Gandhiji’s favourite hymns and prayers performed by children and youth – members of our next generation, and citizens of India. It will also include patriotic and folk songs / dances depicting India’s cultural ethos of “Unity in Diversity”. The event will also have the audience singing our National Anthem with precision, pride and passion. The National Patriotic Project “Come India Sing Jana Gana Mana” is a clarion call to 1.27 Billion Indians to stand together for one cause – the Unity of India, by singing one song – our National Anthem, in the correct code as laid out in the Constitution of India.

Select participants and winners of the above project will get opportunities to perform on stage before audiences at various venues in the National Capital Region of Delhi and across the country. Winners of the “Come India Sing” Nation-wide Talent Contest will earn the privilege of being invited to sing the National Anthem alongside the nation’s leaders and to receive their award. Individuals and groups whose performance stand out will also be invited to attend or to perform at an enormous annual cultural program depicting India’s cultural ethos of “Unity in Diversity”, in a large venue in the National Capital Region of Delhi. Thousands of the nation’s youth will together in one voice celebrate our great nation by singing "Jana Gana Mana". This event will be broadcast nationally and internationally, giving participants exposure on a grand scale that will, at the very least, leave them with memories that will last for a lifetime and, at the very most, be the key element in inspiring them realize their greater dreams.