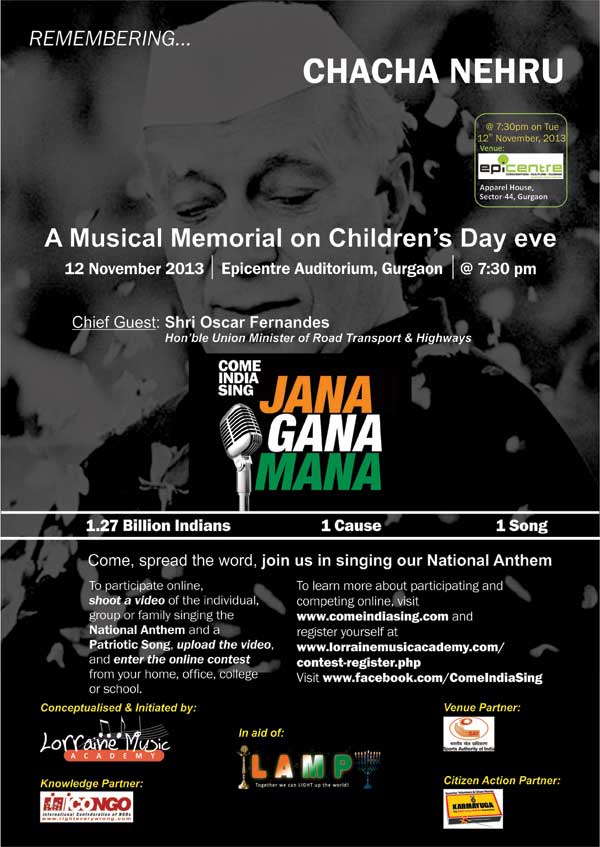 The musical memorial will include performances by children and youth – members of our next generation, and citizens of India. At this event, children will express themselves in song, dance, performances on the piano and various instruments, speeches and poems. Children aged 4 to 17 years, and youth will sing, play and speak from their heart. They will sing songs and play music that they love. The event is being organised to celebrate children and remember their significant and important place in our lives. There will also be a performance by children from economically backward sections of society.

The “Come India Sing” Nation-wide Audition & Talent Contest is open to all. This includes a slogan contest for every Indian citizen to express what the National Anthem means to them. The audition & talent contest also encourages the practising and the singing of “Jana Gana Mana”, and a Patriotic Song.

Participation can be as an Individual, as a Family or as a Group of friends, a school, a college, classmates, office colleagues, communities, RWAs…. All one has to do is record on video one’s family or group or oneself singing the song, upload the video to YouTube, complete the registration form on our website, and be a part of the nation-building project. Age is no bar. This audition and talent contest is open to all ages.

Select participants and winners of the above project will get opportunities to perform on stage before audiences at various venues in the National Capital Region of Delhi and across the country. Winners of the “Come India Sing” Nation-wide Audition & Talent Contest will earn the privilege of being invited to sing the National Anthem alongside the nation’s leaders and to receive their award. Individuals and groups whose performance stand out will also be invited to attend or to perform at an enormous annual cultural program depicting India’s cultural ethos of “Unity in Diversity”, in a large venue in the National Capital Region of Delhi. Thousands of the nation’s youth will together in one voice celebrate our great nation by singing "Jana Gana Mana". This event will be broadcast nationally and internationally, giving participants exposure on a grand scale that will, at the very least, leave them with memories that will last for a lifetime and, at the very most, be the key elements in inspiring them realize their greater dreams.