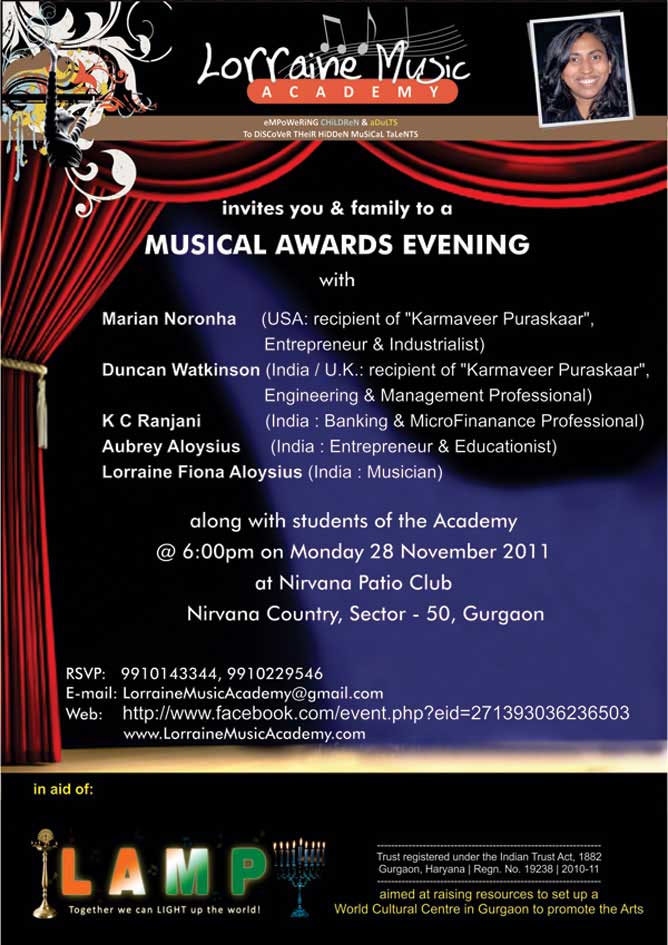 The musical awards evening forms a part of the Music & Art Festival planned in aid of LAMP Trust – aimed at raising resources to set up the LAMP World Cultural Centre in Gurgaon, National Capital Region of Delhi, to promote the Arts.

Two members of the Advisory Board of the Lorraine Music Academy – Marian Noronha & Duncan Watkinson – are all set to receive an award for their commendable work in the field of social service after having been recommended & nominated for the awards by Aubrey Aloysius.

You and family are welcome to join us in felicitating Marian Noronha & Duncan Watkinson for being awarded the “Karmaveer Puraskaar”. The evening will include:

Earlier, Marian Noronha, Chairman & President, Turbocam International, USA & Duncan Watkinson, Managing Director, Turbocam India Pvt. Ltd. will receive the awards on Saturday 26th November (“National Citizen Action Day”) at the exclusive award ceremony which will take place @ 6:00pm at Sri Ram School Auditorium, DLF-III, Gurgaon. This will be followed by a full day “Right Every Wrong” Conclave on 27th November, where Marian Noronha & Duncan Watkinson will speak on the theme “Active Citizenship for fulfilling Fundamental Duties”. The idea is to encourage Social Justice and Democratic Values by being an Active Citizen, where we perform our Fundamental duties for better nation building.

Aubrey Aloysius says, “I have known Marian Noronha personally & professionally over the past 21+years. During this time Marian has been my mentor, friend and advisor. Marian’s wisdom and exemplary life has had a huge positive impact on my life. Marian Noronha spent much of his college years working in slums in Mumbai and villages in Maharashtra. As an engineering student, he developed windmills for rural applications. He left India in 1977 with just $6, started Turbocam in 1985 in America, and Turbocam India in 1989 as a manufacturer of complex machined aerospace components, creating jobs in Goa as a solution to poverty. Since 1999, Marian has redeemed 42 families from slavery in Nepal, created three villages, and built and supports four schools with over 400 children. His companies employ over 450 in nine countries and involve many in charitable work. He has developed, funded and installed water drilling, pumpline and treatment systems in Nepal, India and Ghana. His company was awarded the Freedom Award by U.S. President George W. Bush in 2007 for extraordinary support of employees who served in Operation Iraqi Freedom. In 2009 Business N.H. magazine named him the Business Leader of the year in New Hampshire, U.S.A.”

“Over the past 23+ years that I have known Duncan Watkinson as my mentor and friend, I have seen him tirelessly pursue – in personal and public life – the path of honesty, integrity, humility, ethical business practice, social justice and mercy in action. He has relentlessly pursued anti-corruption policies, having not paid a single bribe, to the extent of incurring consequent losses / project delays. He has cultivated an environment of honesty & truthfulness in his organization. His life has been an example of frugal living and sacrifice in serving the poor and needy in our community across India. He is involved with various works to serve the poor and needy such as running clinics, slum schools, a leprosy ambulance and old people’s home. He has relentlessly pursued anti corruption policies. He is the Founder Trustee of The SPAN Trust, Bangalore, where the leprosy affected are helped to earn a living. It also runs a Day Care Centre and Infant School in a Pune slum and self-help programmes for women. Duncan Watkinson has been advisor to Jesus Mercy Home Association Society, which runs orphanages, a rural hospital and nurses’ training in Tamil Nadu. He also cares for the leprosy-affected in Gulbarga through Karuna Charitable Trust, in which he is the Trustee”, says Aubrey Aloysius, Managing Director of Lorraine Music Academy & Founder Trustee, LAMP.

“I am concerned about helping the poor and needy and have spent much time, energy and money in helping the disadvantaged. However, I feel that one issue of social justice which must be addressed is the paying of bribes. I believe that the nation would change if a few lakh determined and outspoken people all refused to give or take bribes. We do not need new laws; we need ‘better’ people. I am longing for an army of such people to rise up and be counted”, says Duncan Watkinson.

“When a citizen sees a problem in society, he cannot wait until somebody else solves the problem. He steps into the need, even though the problem may be far bigger than himself. As he does so in a humble manner, seeking the help and support of his Creator rather than doing it for his personal glory, others join in and edifices may crumble,” says Marian Noronha.

Our nation and the world are in need of leaders with character and resolve to create change through a commitment to social issues. We at the Lorraine Music Academy & at the LAMP Trust congratulate Marian Noronha & Duncan Watkinson on being selected for the Global Indian Karmaveer Puraskar & the Global Citizen Karmaveer Puraskar – National Awards for Social Justice & Citizen Action 2011, in recognition for their vision and work on social issues. We admire Marian Noronha & Duncan Watkinson for possessing the conviction and compassion to stand up, speak out and lead the change with their positive attitude!

Marian’s, Duncan’s & Turbocam’s story about their stand against bribery has been picked up in the national media:

The management of iCONGO, which has selected their nomination after thorough due diligence based on the process created by the international HR audit firm MERCER and Grant Thornton said that they were glad to have found true champions of social justice issues in Marian Noronha and Duncan Watkinson and wish that more and more celebrities gave their time, involvement and humane feelings towards addressing social justice issues and being the change and role models for other citizens to follow. They added that Marian Noronha and Duncan Watkinson who have always excelled in whatever they do be it as husbands, fathers and entrepreneur/professionals have also proved and excelled as Citizen Action champions that if one decides to walk the talk and do their bit for social justice, besides living our own personal lives and day to day business, India will truly become the best nation and democracy in the world with humane, just and responsible citizens.

The iCONGO promoted “KARMAVEER PURASKAAR (KVP)” are the Global Awards for Social Justice and Citizen Action instituted by the people sector & civil society with various partner organisations, citizens at large and media supporters. Be the change you want to see in this world is what every KARMAVEER inherently believes and practices.

The awards are given every year on the 26th day of November, our National Social Justice and Citizen Action Day, the day we adopted our constitutional pledge as a REPUBLIC and Indian Citizens in 1949. It is the first award of its kind from India, and probably around the globe, that has been held every year for the past 5 years, at a very austere, simple and dignified program in the National Capital Region of Delhi.

The “KARMAVEER PURASKAAR” awards ceremony has over the years become a “MELTING POT” where People from India & Global Citizens that comprise individuals ranging from princes and princesses to global bestselling authors, young politicians, statesmen, bureaucrats, ambassadors, actors, singers, captains of industry, media professionals, development workers, young adults, students, school children, homemakers, academicians, slum workers and others who come “TOGETHER as ONE to RIGHT every WRONG”.

This year iCONGO, in association with, VSO India and SOAP, has also launched Karmayuga – Right every Wrong Generation, an initiative that salutes and showcases the extra ordinary and inspiring work done by ordinary mortals, to Right a Wrong that they see around them. To be a part of the “Karmayuga Campaign” one need not join an NGO or campaign, nor give any money, clothes and newspapers to charity. All that one needs to do is do small simple acts with big commitment & involvement” to address wrongs in the society. The person can post his story on the official Karmayuga website www.righteverywrong.com , so that more people can follow his/her example and the tipping point reached, wherein everyone gets together to RIGHT every WRONG. Best Citizen Action stories will be awarded Karmaveer Chakra – a medallion for proactive Citizen Action, instituted with the UN.

The awards and the Chakra recognize and applaud the social commitment of concerned individuals, who have proactively and voluntarily worked for bringing a positive transformation in the society and the world we live in. In today’s world where there is huge apathy & indifference, we feel a paramount need for being not just a good person but also a good citizen who exercises her/ his rights, duties & responsibilities as a concerned, just and humane citizen.