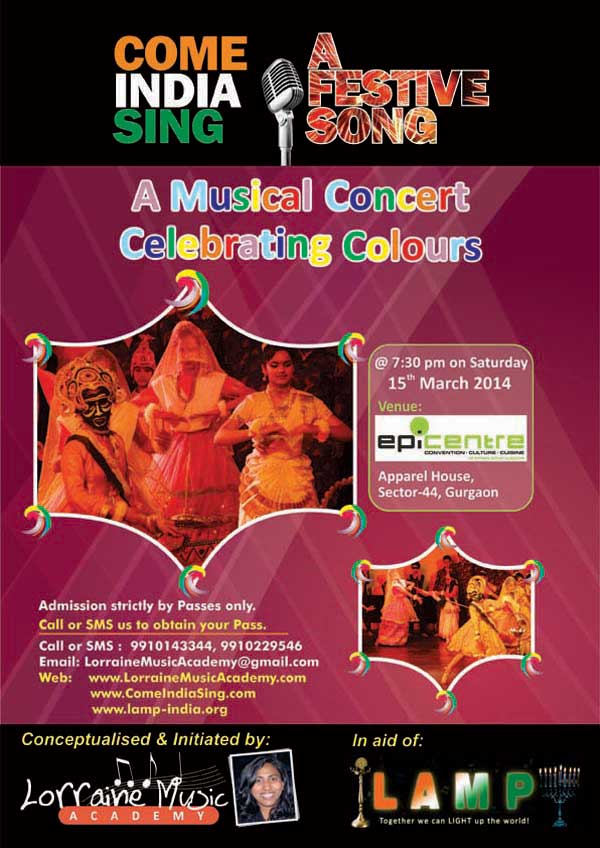 For the first time ever, the audience witnessed a creative way of celebrating Holi in an auditorium integrating instrumental music, singing, dance performances and painting of colours. Musicians, singers, dancers and visual artists – both professionals and children of all ages – performed together on stage to an enthusiastic and participative audience.

Lorraine Fiona Aloysius played on piano the work of French composer Claude Debussy’s 1st Arabesque – while versatile painter, sculptor & photographer Savita Malhotra painted on stage to the music. Ganesh Mohan left the audience mesmerised with his dance to festive music which combined art, dance, balancing acts, juggling and skating. Aubrey Aloysius led the group with “Edelweiss”  – a world famous song about a white flower from the Hollywood movie – “Sound of Music” while children painted on stage. The teenage band and children sang songs depicting colour – “Somewhere Over The Rainbow”, “Blue Suede Shoes”, “Yellow Submarine”, “Yellow”, “Black Velvet, “Colours In The Sky”, “Counting Colours In The Sky”. The final act was the painting of patriotic rainbows by children – using the colours saffron, white, green and blue. Aubrey Aloysius conducted a brief workshop to educate and encourage the audience to abide by the Constitution of India and respect its ideals and institutions, the National Flag and the National Anthem. This included an explanation on the proper singing the Indian National Anthem as per the code as laid out in the Constitution. The concert ended with audience singing the Indian National Anthem – Jana Gana Mana – with pride, passion, and precision, in the right rhythm, melody and timing – in 52 seconds.

Aubrey Aloysius, founder of the Lorraine Music Academy and the LAMP Trust, and Chairman of the National Patriotic Project, says “Music is food for the soul. Good food and good exercise gives you good physical stability. A good diet of the right kind of music gives you mental, emotional, intellectual and spiritual stability. India, with it’s beautiful and diverse cultural heritage, is known globally as the ‘land of festivals’. We have a great and diverse heritage of Folk and Festive Songs. India’s unique cultural ethos is well described as ‘unity in diversity’. We will encourage every Indian to sing their respective Folk Songs and Festive Songs. We will encourage singing across the National Capital Region and the nation among citizens, community members, members of RWAs, offices colleagues, students at schools and colleges, etc. Music helps the creative process and sparks the imagination and ideas. When this musical imagination and experience of singing in a group circumstance is ignited, we have the most extraordinary power to change young lives for positive living and nation-building.”

This event is a part of the ongoing National Patriotic Project “Come India Sing Jana Gana Mana” that was launched on 15th August 2013, our Independence Day.

The “Come India Sing” Nation-wide Talent Contest is open to all. This includes a slogan contest for every Indian citizen to express what the National Anthem means to them. The contest also encourages the practising and the singing of “Jana Gana Mana” and other songs.