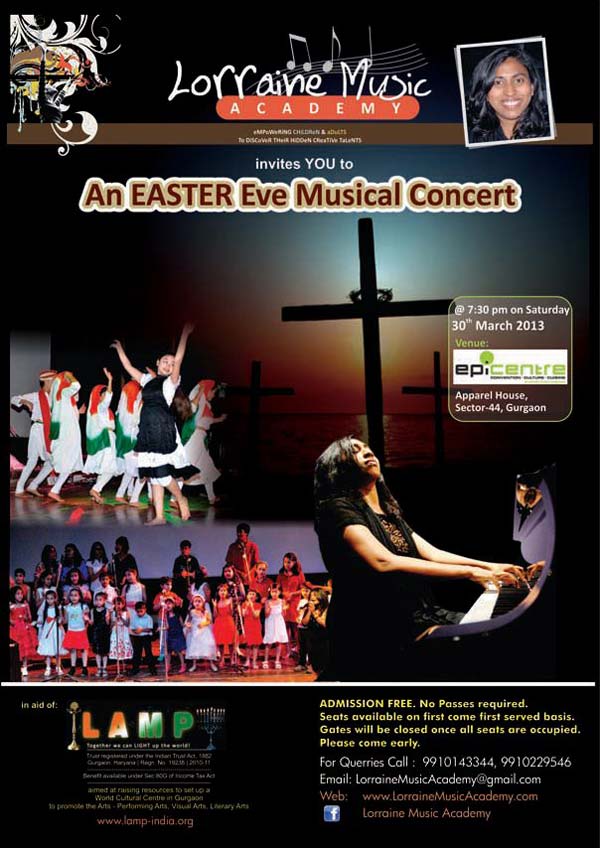 The Guests of Honour for the Concert included:

Most of us associate Christendom with Christmas and the birth of Jesus. Actually, the most significant festival of the Christians is Easter (the Resurrection of Jesus on Easter Sunday, after being crucified on Good Friday). In the western music church tradition, famous composers like Mozart, Bach, Handel, etc have composed music, especially choral works – masses, oratorios, passions and cantatas – to celebrate the resurrection of Jesus.

This event brought to the audiences samples of the western compositions, modern style Easter Gospel and Easter Rock alongwith a contemporary presentation of the Last Supper & the Resurrection through the Indian Classical Dance format.

LORRAINE FIONA ALOYSIUS started playing the piano from the age of 8, greatly encouraged & inspired by her mother, Helen D’Cruz. Lorraine initially trained in Kuwait under Johnny Gomes. She then trained under the tutelage of Aida Francis. She is a Licentiate of the Trinity College of London – UK (Pianoforte) and a Masters in Banking & Finance. She has experience in teaching, creative thinking, public relations, training and motivating large teams across the country. Lorraine has been living in Gurgaon since 2004 and is the Creative Director & Principal of Lorraine Music Academy. She has sent over 300 students for examinations of Associated Board of the Royal Schools of Music, U.K., Trinity College of London, U.K., Trinity Guildhall, U.K., and RockSchool, U.K. Lorraine also oversees a regular visiting faculty that comes in from across the globe including some of the top global Colleges of Music & Drama, to teach our students during various periods of the year. She has performed in concerts at various auditoria across the country. Lorraine Fiona Aloysius was awarded in 2012 the coveted “KARMAVEER PURASKAAR” for her contribution in the area of Music & Performing Arts.

“Nrityarpan” is a professional and highly talented young dance troupe consisting of 7 ladies and a gentleman from economically backward society of Bareilly trained by the Late Father Thomas D’Sa. The team have travelled and performed across the globe. They gave two inspiring dance performances with a social message – one entitled “Atma Daan” depicting Jesus washing His disciples’ feet during the Last Supper; the other entitled “The Seed” depicting the Resurrection. This team will now be nurtured by LAMP Trust and will continue to perform perform before national and inbternational audiences under the aegis of “LAMP Nrityarpan”.

The LORRAINE MUSIC ACADEMY CHOIR and the LORRAINE MUSIC ACADEMY ROCK BAND. Children added excitement to the event with choral singing and performances along with professional musicians and artistes to celebrate, rejoice and share the Easter Spirit. The performance began with over 50 children singing “He’s Got The Whole World In His Hands” alongwith Shantanu Arora, the winner of the 2012 edition of the Nation-wide Talent Contest for the “LAMP-iCONGO Karmaveer Chakra for Gospel Music (Jury Award)” singing this very song. The performers were accompanied by instrumentalists on a range of musical instruments: Piano, Electronic Keyboards, Violin, Guitars, Drums, etc. Other songs performed by the Choir and the Band included “God Still Loves The World”, “Where Is Love”, “Happy Day”, “What I’ve Overcome”, “I Know My Redeemer Lives”, “Because He Lives”, “Via Doloroza” among many others. This was followed by Piano performances by Rhea Bawa, Rohit Adsule and Jayant Gopalan. The highlight of the evening was the capitivating and endearing Musical Theatre performance of “Food Glorious Food” from the Hollywood movie “Oliver” based on the book “Oliver Twist” by Charles Dickens. The Gospel song by Janie Grace “You Lead, I Follow” was sung by Ananya Panwar, winner of the 2012 edition of the “LAMP-iCONGO Karmaveer Chakra for Pop Music (Popular Vote Award)”.

Aubrey Aloysius, founder of LAMP Foundation, said “We presented this concert to the National Capital Region to inspire us all to appreciate, enjoy and learn music at a new level. We bring good music and art to the community, not just for entertainment, but for true education and appreciation. Teaching children and adults how to understand & appreciate music and to play an instrument is our passion and mission. We believe that the right kind of music makes the right kind of person. Music is food for the soul. Good food and good exercise gives you good physical health. A good diet of the right kind of music gives you good mental, emotional, intellectual and spiritual health”.

This concert forms a part of the Music & Art Festival in aid of LAMP Trust – aimed at raising awareness and resources to set up the LAMP World Cultural Centre in Gurgaon, National Capital Region, to promote the Arts – Performing Art, Visual Art, Literary Art. LAMP also endeavours to make resources available to the poor towards skill & talent development, training & basic education in the under-served communities across India.

The Thinker’s Forum with Author Oswalf Pereira
Scroll to top