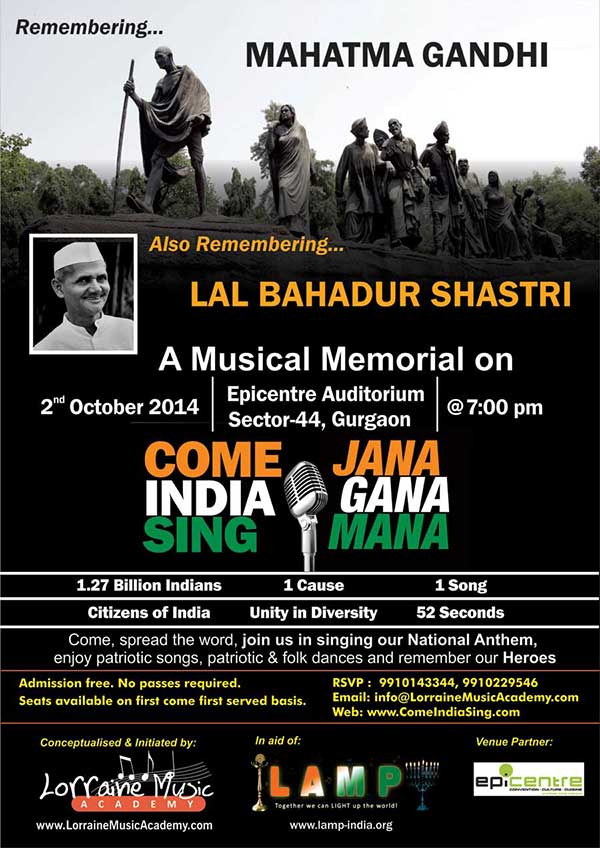 A unique event was hosted by Lorraine Music Academy and LAMP Trust on the 2nd of October 2014, at Epicentre Auditorium, Gurgaon that paid homage to the Father of the Nation, Mahatma Gandhi, on the occasion of his 145th birth anniversary, and to another of our Nation’s Heroes, Lal Bahadur Shastri, on his 110th birth anniversary.

The event had distinguished Guests and members of the community from across the National Capital Region and from other States.

Shri Aubrey Aloysius, Chairman, National Patriotic Project; CMD, Lorraine Music Academy; President, LAMP Trust, gave a welcome speech recalling the impact that Mahatma Gandhi had on his life as a young boy in school. He also shared from Lal Bahadur Shastri’s life recalling the winning of the 1965 war and his famous slogan “Jai Jawan Jai Kisan”. He extolled the spirit of sacrifice that our founding fathers and freedom fighters had.

Chief Guest, Shri Oscar Fernandes, Former Union Cabinet Minister, Government of India & Honourable Member of Parliament (Rajya Sabha), gave an opening speech extolling the virtues of Gandhiji and encouraged all to celebrate him by following in his footsteps. He shared some incidences from Gandhiji’s life that highlighted the sacrifices he made that led the people of the nation to follow him wholeheartedly. He also reflected on Lal Bahadur Shastri’s life and sacrifice for the country.

The Musical Memorial included “THE THINKERS’ FORUM CHARCHA”, moderated by Aubrey Aloysius,  which consisted of live on-stage interviews and interactions with Sushri Radha Bhatt, Chairperson, Gandhi Peace Foundation and Smt. Neera Shastri, Daughter-in-law of Lal Bahadur Shastri, delving into the noble qualities, ideals, ethics, values & principles of these exemplary National Heroes, so as to pass them on to inspire our next generation of citizens for positive nation building. “Simplicity is the way of life” was the message that Sushri Radha Bhatt shared with the audience, as she encouraged them to curb the gathering of ‘garbage’ in the house by limiting shopping to the bare necessities of life. She also expressed that it is indeed not easy to imbibe Gandhiji’s ideology in one’s life, it takes time & effort to do so. Smt. Neera Shastri shared many interesting events from her life which made us understand Lal Bahadur Shastri better. The discussion also included recalling the winning of the 1965 war under the leadership of our 2nd Prime Minister, Lal Bahadur Shastri, and his famous & stirring slogan “Jai Jawan Jai Kisan”. “Waste not, want not,” was Smt. Neera Shastri’s motto as she encouraged us to actively take up the “Swachcha Bharat” Campaign launched by our Honourable Prime Minister, inspired by Mahatma Gandhi. The inspiring and mesmerising evening witnessed the launch of the “COME INDIA SING FOR CLEAN INDIA” initiative.

More that 110 children and youth from different Schools and Universities from across Gurgaon, National Capital Region of Delhi rekindled in us the patriotic spirit. The musical memorial included performances of Gandhiji’s favourite hymns and prayers performed by the youth and children – members of our next generation, and citizens of India. The songs included “Vaishnavo Jana To”, “Raghupati Raghava”, “Jai Jai Mataram”, and a medley of patriotic dances. Lorraine Fiona Aloysius played on the Piano the world famous music “Ode To Joy” composed by Beethoven whose music Gandhiji’s enjoyed listening to, while Oscar Fernandes, Aubrey Aloysius & Ananya Panwar sang the song “Joyful, Joyful”. A group of singers from the Immaculate Conception Church sang some of Gandhiji’s favourite hymns “Abide With Me” and “Amazing Grace”. The musical memorial also paid homage to another great Hero of our nation, Lal Bahadur Shastri, who gave this nation the popular & inspiring slogan “JAI JAWAN JAI KISAN”.

The event also marked the encouragement of a nation-wide drive to encourage proper singing of our National Anthem the right way as per the code laid out in the Constitution of India across schools and educational institutions. The initiative includes speaking at gatherings of students in schools and educational institutions, during assembly time, in offices and institutions, conducting workshops and training sessions, teaching the correct way of singing the Anthem, with passion, pride and precision, i.e.- in 52 seconds.

Article 51A of the Constitution of India states that “It shall be the duty of every citizen of India to cherish and follow the noble ideals which inspired our national struggle for freedom; to uphold and protect the sovereignty, unity and integrity of India;…”.

The “Come India Sing” Nation-wide Audition and Talent Contest for Music, Art & Culture is open to all. This includes a slogan contest for every Indian citizen to express what the National Anthem means to them. The contest also encourages the practising & the singing of Jana Gana Mana, Patriotic Songs, and Folk Songs among others.

Select participants and winners of the above project will get opportunities to perform on stage before audiences at various venues in the National Capital Region of Delhi and across the country. Winners of the “Come India Sing” Nation-wide Talent Contest will earn the privilege of being invited to sing the National Anthem alongside the nation’s leaders and to receive their award. Individuals and groups whose performance stand out will also be invited to attend or to perform at an enormous annual cultural program depicting India’s cultural ethos of “Unity in Diversity”, in a large venue in the National Capital Region of Delhi. Thousands of the nation’s youth will together in one voice celebrate our great nation by singing “Jana Gana Mana”. This event will be broadcast nationally and internationally, giving participants exposure on a grand scale that will, at the very least, leave them with memories that will last for a lifetime and, at the very most, be the key elements in inspiring them realize their greater dreams.

To participate in or contribute to the nation building project, one can log on to the following websites: