A MUSICAL EVENING OF LIGHT in aid of LAMP 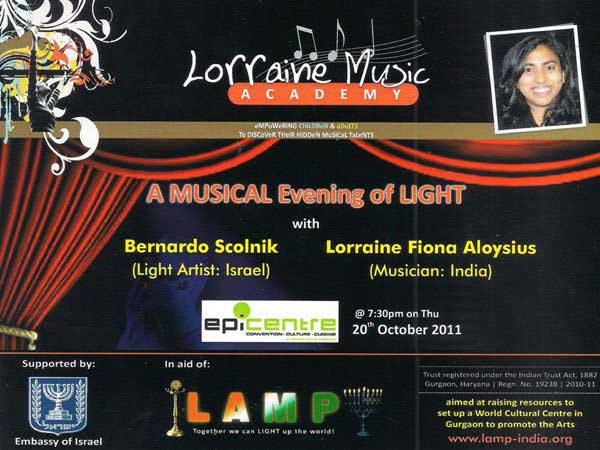 This festive season, on the eve of Diwali – the Festival of Lights – we present to the community in Gurgaon – the National Capital Region of Delhi, India – a unique “Music & Art” experience. The Musical Evening Of Light is a virtuosi performance integrating music along with lighting effects.

Light has its own presence. Beyond its practical functions, such as creating security, illuminating obstacles and marking passageways, light also enables the observer to perceive the city in a different manner. Through light one can rediscover the city’s lines, geography and strength. The preoccupation with light as raw material has developed rapidly over the past twenty years. This process has opened a new world that integrates beauty, concept, abstraction and technology and includes a wide spread of possibilities and usages. Through this Musical Evening of Light, we will together discover the unique quality of the integration of light as a creative element and not just a means to lighting works of art.

The evening will include:

Light sources, video projections, body colours and music are an integral significant part of Bernardo Skolnic’s performance. He will introduce the physical and metaphysical significance of light in his performance “Illumination” which deals with the path of the supreme realization of man on earth, common to many ancient religions all around the planet.

Lorraine Fiona Aloysius will play the Piano and Sing in English, Hindi, Konkani & Hebrew (the ancient language of Israel). The evening will include music being played on a wide range of musical instruments including the Piano, Electronic Keyboard, Flute, Rhythm Guitar, Tambourine, Bass Guitar, Lead Guitar, Drums along with Vocal & Choral singing. A surprise musical element from the world of nature is in store for the audience.

This concert forms a part of the LAMP Music & Art Festival planned in aid of LAMP Trust – aimed at raising awareness and resources to set up the LAMP World Cultural Centre in Gurgaon, National Capital Region of Delhi, India to promote the Arts.

Our Chief Guest will be Mr. Yahel Vilan, Minister & Deputy Chief of Mission, Embassy of Israel in New Delhi

We would like to take this opportunity to acknowledge the support of the EMBASSY OF ISRAEL in New Delhi.

LAMP also endeavours to make resources available to the poor towards skill & talent development, training & basic education in the under-served communities across India through its network of institutional partners.

BERNARDO SKOLNIK was born in 1957 in Montevideo (Uruguay), lives and works in Israel. Bernardo Skolnik is an interdisciplinary artist and curator of exhibitions in Europe in the fields of painting, sculpture, installations, performance, and theater. He studied Agriculture in Jerusalem and painting at The Academy of Fine Arts, Rome. His works and exhibits can be found in collections in Israel and across the globe, and has won prizes in Germany and in Italy.

LORRAINE FIONA ALOYSIUS started playing the piano from the age of 8, greatly encouraged & inspired by her mother, Helen D’Cruz. She is a Licentiate of the Trinity College of London (Pianoforte) and a Masters in Banking & Finance. She has experience in teaching, creative thinking, public relations, training and motivating large teams across the country. Lorraine has been living in Gurgaon since 2004 and is the Creative Director & Principal of Lorraine Music Academy. She oversees the training of over 300+ students (adults & children) in music. She has sent over 300 students for examinations of Associated Board of the Royal Schools of Music, U.K., Trinity College of London, U.K., Trinity Guildhall, U.K., and RockSchool, U.K. Lorraine also oversees a regular visiting faculty and artistes from across the globe.

MUSIC & ART FESTIVAL in aid of LAMP
Scroll to top