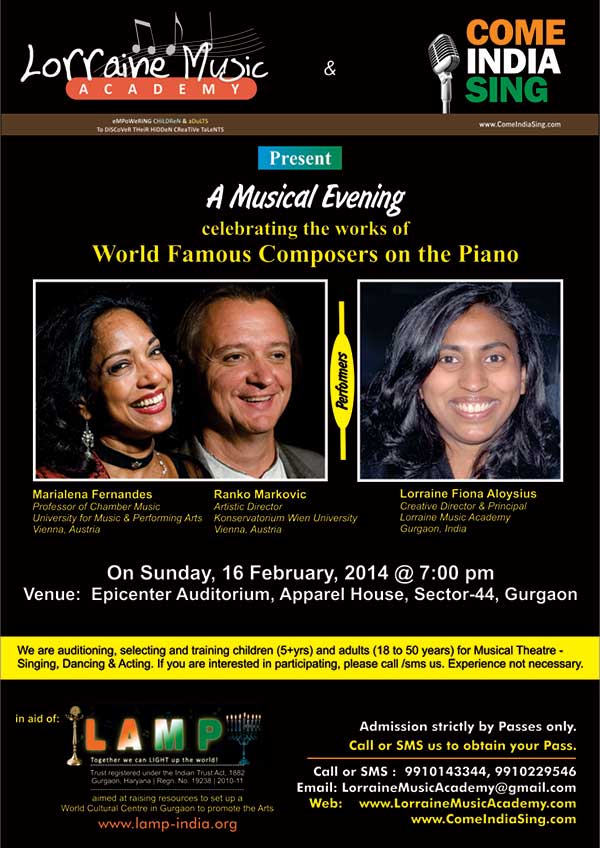 The concert will include works of World Famous Composers on the Piano and transport you to the Music World of Vienna, Austria. The Programme will be an amazing source of inspiration for children and adults and will contribute to their musical memories for a life-time. The concert will include performances of the works by world famous composers such as Johann Strauss, Pyotr Ilyich Tchaikovsky, Sergei Rachmaninoff, Arnold Schönberg, Wolfgang Rihm, among many others, in the format of the Vienna Waltz Export Program. The concert will bring a surprise element of showcasing the Adaptation Of The Waltz Into Popular Indian / Bollywood Music that we all love.

The following two renowned artistes from Vienna, Austria will perform in concert:

They will be joined in concert by:

• MARIALENA FERNANDES was born in Mumbai and has been since several years a recognized pianist on the international scene. After completing her education in Psychology from the Mumbai University she went on to the University of Music and Performing Arts in Vienna, where she received her Diploma with distinction in Piano and Chamber Music Performance studying with Walter Panhofer and Bruno Seidlhofer. Solo, chamber music and orchestra concert appearances followed and Fernandes is now regularly performing all over the world, including various TV and Radio broadcasts and CD recordings. Her repertoire does not only cover a broad range of classical music but reaches out for the contemporary, unconventional and improvised. Being appointed Professor at the University of Music and Performing Arts in Vienna she is holding workshops and master classes and serving as Jury member at Competitions and as Artistic Director and Program Curator in series such as the „Uno, Due, Tre“ Cycle at the Musikverein in Vienna. In 2013 Marialena has obtained her PhD from the University of Music and Perforning Arts Vienna.

• RANKO MARKOVIC was the Artistic Director of Konservatorium Wien University from 1999 – 2014 and will join the Board of Directors at the Zürich University of Arts later this year. He was born in Zagreb, Croatia, and studied at the Mozarteum University Salzburg, at the Ferenc Liszt Academy in Budapest, at Tchaikovsky Conservatoire in Moscow and in London. His teachers were Peter Lang, Alfons Kontarsky, Ferenc Rados, Yevgeny Malinin and Maria Curcio. He has performed recitals and chamber music concerts in London, Vienna, Salzburg, Moscow and St. Petersburg (Philharmonia) etc. and has recently also played with the Kopelman Quartet in Vienna Musikverein and with the Konservatorium Wien Chamber Music Ensemble in the Poly Theatre in Beijing.

Fernandes and Markovic have performed as a piano duo since 2000. They have had special success with performances of the piano transcriptions of symphonies by Mahler and Bruckner, including those in the Museum of Art History (on Mahler’s original piano), in the Arnold Schoenberg Center and the Jewish Museum in Vienna, at the Festival of the Four Cultures in Lodz, in the Austrian Cultural Forum and in the residence of the Austrian Embassy in London, in the ACF in New York, at the University of California in Los Angeles and McGill University in Montreal, in the Kazakh National Music Academy in Astana and at the Con Brio Festival in the NCPA in Mumbai. The duo also took part in the Mahler Symposium at Vienna State Opera on 18 May 2011, the 100th anniversary of the composer’s death. In 2013 they have been performoming in Brazil, Korea and Taiwan for the first time. The duo has released two CDs featuring major piano transcriptions: Mahler’d Sixth Symphony arranged by Zemlinsky and Bruckner’s Third as arranged by Mahler.

• LORRAINE FIONA ALOYSIUS started playing the piano from the age of 8, greatly encouraged & inspired by her mother, Helen D’Cruz. Lorraine initially trained in Kuwait under Johnny Gomes. She then trained under the tutelage of Aida Francis. She is a Licentiate of the Trinity College of London – UK (Pianoforte) and a Masters in Banking & Finance. She has experience in teaching, creative thinking, public relations, training and motivating large teams across the country. Lorraine has been living in Gurgaon since 2004 and is the Creative Director & Principal of Lorraine Music Academy. She has sent several hundreds of students for examinations of Associated Board of the Royal Schools of Music, U.K., Trinity College of London, U.K., Trinity Guildhall, U.K., and RockSchool, U.K. Lorraine also oversees a regular visiting faculty that comes in from across the globe including some of the top global Colleges of Music & Drama, to teach her students during various periods of the year. She has performed in concerts at various auditoria across the country.

The concert aims to raise awareness and resources in aid of LAMP Trust and the National Patriotic Project “Come India Sing…”.

Aubrey Aloysius, founder of the Lorraine Music Academy and the LAMP Trust, and Chairman of the National Patriotic Project, says “Touching lives through music, Lorraine Music Academy exists to access and promote the rich heritage of world music – bringing music to children, their families and the community at large. Music transcends all boundaries. It brings people together from across the globe and unites them. Music is food for the soul. Good food and good exercise gives you good physical stability. A good diet of the right kind of music gives you mental, emotional, intellectual and spiritual stability. Music helps the creative process and sparks the imagination and ideas. LAMP Trust exists to promote music and the arts across India. LAMP has launched the National Patriotic Project ‘Come India Sing…’. India is young! India’s biggest asset is its young population. We aim to rekindle and build a National fervour of Patriotism and motivate the youth to build their lives positively to contribute to India. India is a nation with a multi-faceted and diverse cultural heritage. We can build solidarity through appreciation of our cultural diversity, acting on the principle that the understanding and appreciation of diversity is a powerful unifier – that our most important similarities, human common ground, are to be found in our distinctive histories of expression. Nowhere is this potential for positive fusion more evident than in the nation of India. Through this National Patriotic Project we will empower our children and youth to build on the nation’s cultural ethos of ‘Unity in Diversity’. In selecting the first song that could be re-taught to the nation, we chose the one song that is understood and sung by the whole nation, our National Anthem. Other songs will follow. When this musical imagination and experience of singing our National Anthem is ignited in a group circumstance, we have the most extraordinary power to change young lives for positive living and nation-building.”