There is nothing more soothing to senses than music. Musical events and concerts have been promoting peace and communal harmony. And once again there are efforts being made to collect funds for the Nepal earthquake victims with the help of music.

Students of Lorraine Music Academy recently came forward to raise awareness, sensitivity, resilience, resources and support for national disaster management and relief work. Under the aegis of Come India Sing For Disaster Relief along with Pure Hearts children, the academy and LAMP Trust, children sent out a message of prayer, faith and belief in the Almighty.

Don Moen’s song “God Will Make A Way” was the most soulful one that struck a chord with the audience. Thirteen-year-old Ananya Ravi sang “This Love” by Maroon 5, Bill Wither’s “Ain’t No Sunshine” and Coldplays’ “Yellow”. While Ananya was accompanied by the Come India Sing band, the choir was led by Lorraine Fiona Aloysius on the piano.

Founder of the academy and LAMP Trust, Aubrey Aloysius, was happy with the little that he was able to do. “We may not be directly affected, but we are brothers and sisters and we must feel for them and do what we can to help them rebuild their lives, he said and added, “When natural disasters like earthquakes, floods, landslides, cyclones, tsunamis and heat waves strike, India should be prepared to help in mitigation. The audience was encouraged to lend their voices and their hearts to raise awareness, sensitivity, resilience, resources and support to the relief work and foster a culture of prevention, preparedness and mitigation. The songs that we sang, the resources that we raised, will help the natural disaster victims re-build their broken lives, brick by brick.” 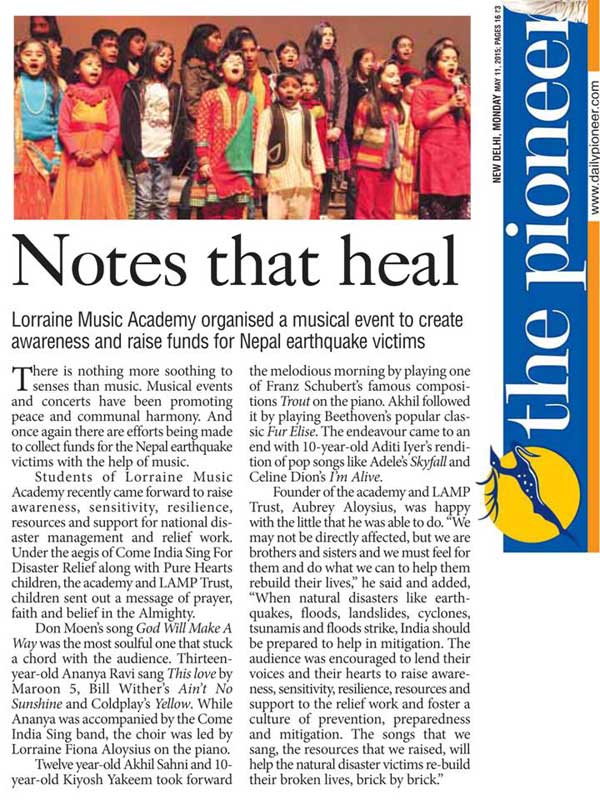