To pay homage to the second Prime Minister of India, Lal Bahadur Shastri, on his 111th birth anniversary and commemorate the 50th anniversary of Shastri’s slogan “Jai jawan jai kisan”, a musical event will be organised at Epicentre in Sector-44 on Saturday.

Shastri’s birth anniversary was on October 2. This event will be hosted by Lorraine Music Academy and LAMP Trust. It will be attended by Shastri’s sons, daughters-in-law, grandchildren and greatgrandchildren.

Former chief election commissioner S Y Quraishi will be the chief guest of the event.

Artistes from across the country will present patriotic and folk songs and group dances on the occasion.

The event is part of a national patriotic project “Come India Sing Jana Gana Mana”. The project was launched on August 15, 2013.

It is said that Lal Bahadur Shastri would end his day by listening to bhajans sung by Lalita Shastri. And so, Shastri’s favourite bhajan compositions like “Bata de koi mohe shyam ki dagariya” from her album “Archana” will be performed at the event.

Another attraction of the event will be a live on-stage interaction with Lal Bahadur Shastri’s sons Anil Shastri and Sunil Shastri. They will talk about the noble qualities, ideals, ethics and values that their father possessed.

Aubrey Aloysius, founder of the Lorraine Music Academy and the LAMP Trust, and chairman of the national patriotic project, said, “Music helps the creative process and sparks the imagination and ideas. When this musical imagination and experience of singing our national anthem is ignited in a group circumstance, we have the most extraordinary power to change young lives.” 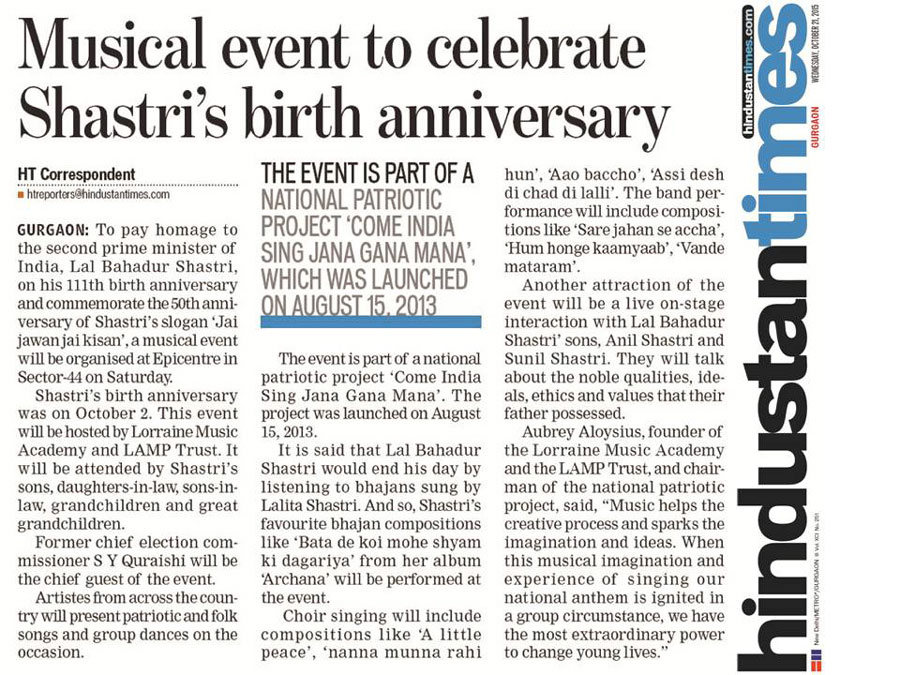 SINGING AND PAINTING HELPED ME DESTRESS : ALL INDIA TOPPER