India will be observing the 50th Death Anniversary of former Prime Minister Lal Bahadur Shastri on January 11. His son BJP leader and Rajya Sabha MP Sunil Shastri who was in Goa, spoke to Gomantak Times reporter Mayank Jha regarding the achievements of his father who coined the famous slogan ‘Jai Jawan Jai Kisan’. A documentary on the life and work of the second Prime Minister Lal Bahadur Shastri is being made and will be released soon.

MJ: What is your reaction when you came to know that there would be a documentary made on the life of Lal Bahadur Shastri?

SS: This is a positive step taken by the filmmaker Aubrey Aloysius to showcase the life of ‘Babuji’ on a film screen. This film will guide people and aware them about the work of ‘Babuji’. People will also be influenced by his honesty, simplicity and many other qualities.

MJ: How much do you think the film will appeal to the current population specially youths?

SS: I am sure the film will be used as historical evidence to inspire every age group of people. Even Prime Minister Narendra Modi during his Independence Day speech at Red Fort had appealed to the people of the country to follow the principles of Lal Bahadur Shastri. After watching the documentary people will be able to know his persona. 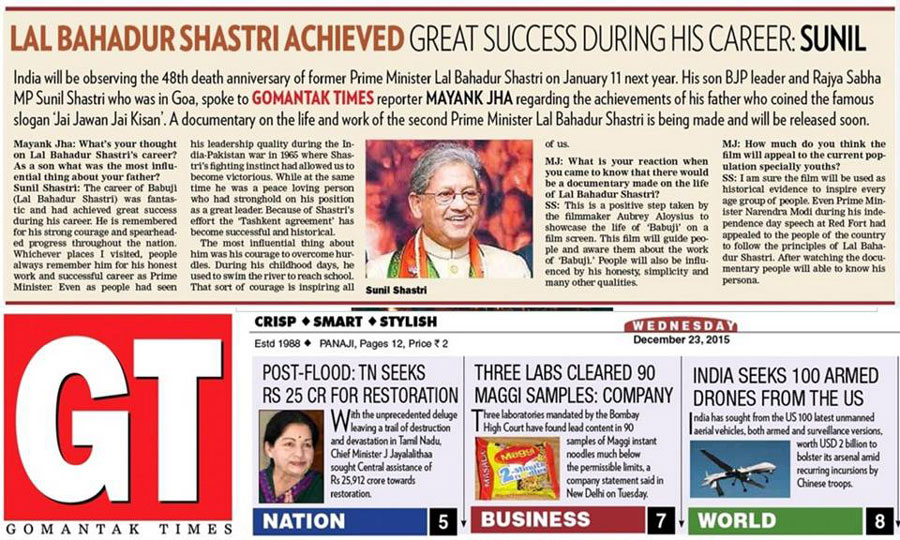 The Man That Freedom Sometimes Forgets
Scroll to top