The spirit of patriotism filled the air at the Epicentre Auditorium in Gurgaon when Lorraine Music Academy and LAMP Trust hosted “A MUSICAL MEMORIAL REMEMBERING LAL BAHADUR SHASTRI” on Saturday 24th October 2015 to commemorate the 50th Golden Jubilee Anniversary of the famous slogan JAI JAWAN JAI KISAN that our Nation’s Hero, Bharat Ratna Lal Bahadur Shastri, has given to our Nation! This slogan is still relevant to the India of our next generation. The audience paid homage to our 2nd Prime Minister on his recent 111th birth anniversary and remembered the 50th Golden Jubilee of the Indo-Pak war that he victoriously led the nation into, followed by the signing of a peace treaty in Tashkent a few months later.

99% members of the Lal Bahadur Shastri family attended the event – his sons, daughters-in-law, grandchildren and great-grandchildren. Many people in the audience came from different parts of the country. They travelled a great distance to be there. The Chief Guest of the event was Dr. S. Y. Quraishi, former Chief Election Commissioner of India.

Angelic voices of young children aged 4 to 14, teenagers, youth and professional musicians from the Lorraine Music Academy and from many schools in Haryana and Rajasthan performed. The evening began with a heavenly hair raising performance by young students of the Lorraine Music Academy and Lorraine Fiona Aloysius, playing on the piano and singing a song called ‘A Little Peace’….“A little loving, giving, sharing, patience and understanding will build a better tomorrow”. The song explained everything that Lal Bahadur Shastri stood for. He encouraged the country to make little sacrifices that would together lead our nation to victory over famine and war. The LAMPstand Band rendered a stunning modern fusion version of “Vande Mataram”, and also performed “Sare Jahaan Se Achcha”, and “Hum Honge Kaamyaab”. The children went on to sing “Aao Bachcho” and “Nanna Munna Rahi Hun”.

The Musical Memorial included “THE THINKERS’ FORUM CHARCHA” consisting of a live on-stage interaction by Aubrey Aloysius with Anil Shastri and Sunil Shastri, sons of Lal Bahadur Shastri, delving into the noble qualities, ideals, ethics, values & principles of our exemplary National Hero, so as to pass them on to inspire our next generation of citizens for positive nation building. Article 51A of the Constitution of India states that “It shall be the duty of every citizen of India to cherish and follow the noble ideals which inspired our national struggle for freedom; to uphold and protect the sovereignty, unity and integrity of India.” Anil Shastri shared secrets and memorable anecdotes about his first hand experiences with their great father – as a father, and as a Prime Minister. Sunil Shastri blessed all the children so affectionately and prayed that in each home would be born and raised a Lal Bahadur Shastri! As their contribution to the Nation Building Project COME INDIA SING, Anil Shastri sang the song “Aa Chal Ke Tujhe” that was made popular by Kishore Kumar; and Sunil Shastri sang the song “Ek Din Bik Jaayega Maathi Ki Mol” made popular by Mohammed Rafi.

The evening was a memorable and enjoyable one that brought fond memories and tears to the eyes of many. The evening ended with the entire family members of Lal Bahadur Shastri coming on stage and singing, along with the entire audience, our National Anthem JANA GANA MANA with pride, passion, and precision – in 52 seconds. 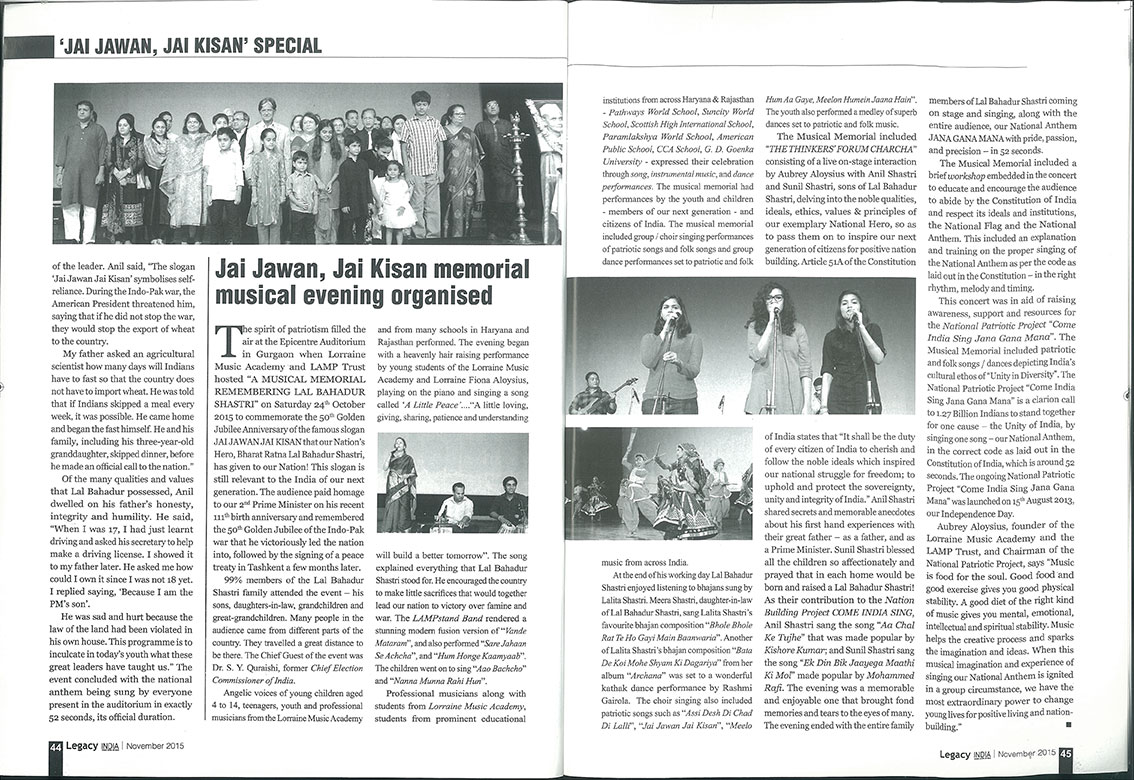