THE LORRAINE MUSIC ACADEMY ALONG WITH THE LAMP TRUST WILL BE PRESENTING AN ODE TO INDIA TODAY. FOUNDER AUBREY ALOYSIUS SPOKE TO I KAUR ABOUT THE EXPLOITATION OF THE NATIONAL ANTHEM IN PRESENT-DAY INDIA

There is a song on our minds, a prayer in our hearts and passion in our souls when the words Jana Gana Mana pour out of us with ease. We feel the goosebumps. Such is the power of patriotism which resonates in every citizen of India when they sing the National Anthem. But what is the National Anthem, asks Aubrey Aloysius, founder of the Lorraine Music Academy and the LAMP Trust. “I remember, as a child, for exactly 52 seconds we were made to sing the National Anthem every morning at school. The lyrics, rhythm and pace of the song were ingrained in my system. Fifty two seconds, not more, not less. That is what the National Anthem is according to the Constitution of India, but that is not how it is being followed today. More than half of our country sings and listens to a song recital of the Jana Gana Mana written by Rabindranath Tagore, not Jana Gana Mana, our National Anthem,” he says and without mincing words adds, “I went for a certain event the other day where the National Anthems of France and India were to be played. After the French Anthem played I eagerly waited for ours to begin. What played then not only shocked me but saddened me to no end. They played Lata Mangeshkar and Asha Bhosle’s version of the National Anthem. There is a code to every country’s Anthem and so is there one to ours. It is not just the lyrics that define it but the format in which it is sung.” Outraged with this trend that has set in the country of improvising the National Anthem, Aubrey started his own movement called ‘COME INDIA SING JANA GANA MANA’. Under that initiative he will present his production ‘A MUSICAL EVENING IN HONOUR OF INDIA’ at Epicenter, Gurgaon today.

The event will include singing, dancing, poetry recitals and speeches in which “the content will be patriotic and folk. It will depict our patriotic fervour and culture. Some of the songs will include Vande Mataram, Saare Jahan Se Achcha, Hum Honge Kaamyaab, Cry For Freedom, Happiness and My Wish. Embedded within the concert is a micro workshop which teaches people how to sing the National Anthem. People won’t even realise that it is a workshop since it will be very interactive,” explains Aubrey.

The musician will also be highlighting the fundamental duties of a citizen of India as per the Indian Constitution. He elaborates, “I think if all the men in the world were to read them, there would be no rapes. The fifth duty says, ‘To promote harmony and the spirit of common brotherhood amongst all the people of India transcending religious, linguistic and regional or sectional diversities; to renounce practices derogatory to the dignity of women.’ So we will also discuss these fundamental duties with people in respect to all these happenings.”

At the end of the performance Aubrey will also give awards to 100 students from the Lorraine Music Academy who excelled in the field of music and art. 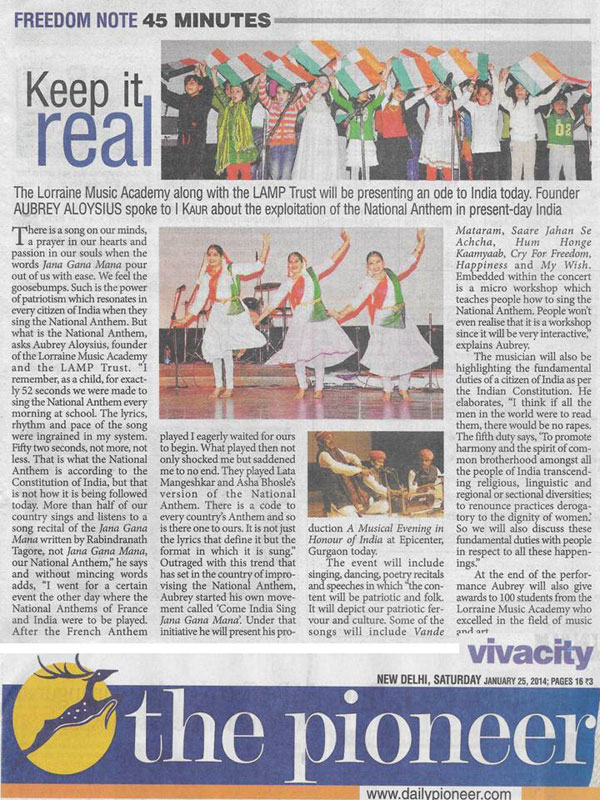 A MUSICAL EVENING IN HONOUR OF INDIA ON REPUBLIC DAY EVE